The Golden Fleece and the Heroes Who Lived Before Achilles 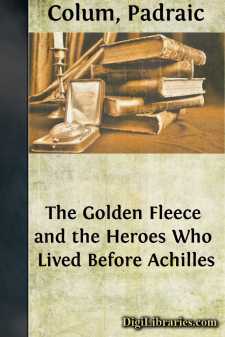 I. THE YOUTH JASON

A man in the garb of a slave went up the side of that mountain that is all covered with forest, the Mountain Pelion. He carried in his arms a little child.

When it was full noon the slave came into a clearing of the forest so silent that it seemed empty of all life. He laid the child down on the soft moss, and then, trembling with the fear of what might come before him, he raised a horn to his lips and blew three blasts upon it.

Then he waited. The blue sky was above him, the great trees stood away from him, and the little child lay at his feet. He waited, and then he heard the thud-thud of great hooves. And then from between the trees he saw coming toward him the strangest of all beings, one who was half man and half horse; this was Chiron the centaur.

Chiron came toward the trembling slave. Greater than any horse was Chiron, taller than any man. The hair of his head flowed back into his horse's mane, his great beard flowed over his horse's chest; in his man's hand he held a great spear.

Not swiftly he came, but the slave could see that in those great limbs of his there was speed like to the wind's. The slave fell upon his knees. And with eyes that were full of majesty and wisdom and limbs that were full of strength and speed, the king-centaur stood above him. "O my lord," the slave said, "I have come before thee sent by Æson, my master, who told me where to come and what blasts to blow upon the horn. And Æson, once King of Iolcus, bade me say to thee that if thou dost remember his ancient friendship with thee thou wilt, perchance, take this child and guard and foster him, and, as he grows, instruct him with thy wisdom."

"For Æson's sake I will rear and foster this child," said Chiron the king-centaur in a deep voice.

The child lying on the moss had been looking up at the four-footed and two-handed centaur. Now the slave lifted him up and placed him in the centaur's arms. He said:

"Æson bade me tell thee that the child's name is Jason. He bade me give thee this ring with the great ruby in it that thou mayst give it to the child when he is grown. By this ring with its ruby and the images engraved on it Æson may know his son when they meet after many years and many changes. And another thing Æson bade me say to thee, O my lord Chiron: not presumptuous is he, but he knows that this child has the regard of the immortal Goddess Hera, the wife of Zeus."

Chiron held Æson's son in his arms, and the little child put hands into his great beard. Then the centaur said, "Let Æson know that his son will be reared and fostered by me, and that, when they meet again, there will be ways by which they will be known to each other."

Saying this Chiron the centaur, holding the child in his arms, went swiftly toward the forest arches; then the slave took up the horn and went down the side of the Mountain Pelion. He came to where a horse was hidden, and he mounted and rode, first to a city, and then to a village that was beyond the city.

All this was before the famous walls of Troy were built; before King Priam had come to the throne of his father and while he was still known, not as Priam, but as Podarces....