The Golden Calf, Which the World Adores, and Desires 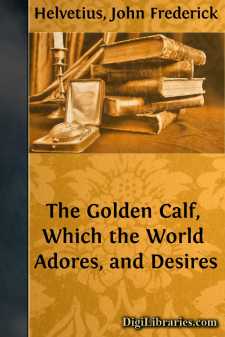 Most Excellent, and Prudent Sirs. Before I enter upon the Description of the Philosophick PIGMY,(in this little Theatre of Secrets) overcoming and subduing GIANTS, I pray permit me here to use the words of Vanhelmont, taken out of his Book De Arbore Vitæ, fol. 630. and here Transcribed.

I compelled to believe, that there is an Aurifick, and Argentick Stone. But (Friend of the Spagyrick Art) I am not ignorant, that many have been found among the most wise, yea among the exquisite Chimists, who have not only consumed their own Goods, but the Goods of others also, in this Great Vulanick Secret, as Experience even at this very day sufficiently proves. For we have seen, the more is the pity! how unwary Chimists, yea such as are more worthy, than those who are called Alchimists; how, I say, they, labouring simply, are daily deluded with Guile of this kind, by Diabolick, Aurifick, and Argentick Suckgoods. Also I know, that many Stupid Men will rise up, and contradict the truth of my true Experience, touching the Philosophick Stone. One will have it to be a work of the Devil; another affirms there is no such thing; a third faith it is the Soul of Gold only, and that with an Ounce of that Gold, an Ounce of Lead, and no more may be again tinged: but this is repugnant to the Attestation of Kifflerus, as I shall briefly commemorate; a fourth believes the Verity and Possibility thereof, but faith it is so chargeable, as it will never quit Cost; with many other like Allegations. Yet I wonder not at this, for according to this Saying,

What we cannot attain to, we admire,But what to know is pleasing, do desire.

How can a Man, fallen from the Fountain of Light, into the Abyss of Darkness, effect any thing to purpose, in Natural things, especially when his Wisdome in this natural Philosophick Study is barren and sophisticate? It is, for the most part, proper to these Fools and unapt men, presently to contemn a thing, not knowing, that more are yet to be sought by them, than they have the possession of. Therefore, rightly saith Seneca, in lib. de Moribus: Thou art not yet happy, if the Rout deride thee not. But I matter not, whether they believe, or contradict what I write, touching the Transmutation of Metals. I rest satisfied in this one thing, which with my eyes I have seen, and what with my hands I have done. For what Philosophers say of themselves, I also have with my hands handled this Spark of the Eternal Wisdome, or this Saturnine Catholick Magnesia of Philosophers, a Fire of potency sufficient to penetrate Stones, yea, a Treasure of so great value, as 20 Tun of Gold cannot exceed the price thereof. What seek you? I believe what I have seen with the eyes of Thomas, and handled as he, (but in the nature of things only) as well as the Adept Philosophers; although in this our decrepit age of the world, That be accounted a most Secret Hyperphysico-magical Saturn, and not known, unless to some Cabalistick Christian only....