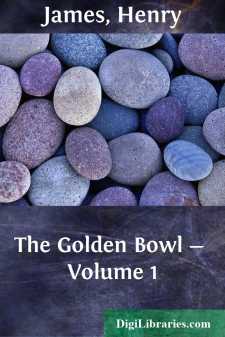 "She appears to have arrived this noon—coming up from Southampton; at an hotel. She dropped upon me after luncheon and was here for more than an hour."

The young man heard with interest, though not with an interest too great for his gaiety. "You think then I've a share in it? What IS my share?"

"Why, any you like—the one you seemed just now eager to take. It was you yourself who insisted."

He looked at her on this with conscious inconsistency, and she could now see that he had changed colour. But he was always easy.

"I didn't know then what the matter was."

"You didn't think it could be so bad?"

"Do you call it very bad?" the young man asked. "Only," she smiled, "because that's the way it seems to affect YOU."

He hesitated, still with the trace of his quickened colour, still looking at her, still adjusting his manner. "But you allowed you were upset."

"To the extent—yes—of not having in the least looked for her. Any more," said Mrs. Assingham, "than I judge Maggie to have done."

The Prince thought; then as if glad to be able to say something very natural and true: "No—quite right. Maggie hasn't looked for her. But I'm sure," he added, "she'll be delighted to see her."

"That, certainly"—and his hostess spoke with a different shade of gravity.

"She'll be quite overjoyed," the Prince went on. "Has Miss Stant now gone to her?"

"She has gone back to her hotel, to bring her things here. I can't have her," said Mrs. Assingham, "alone at an hotel."

"I expect her at any moment. If you wait you'll see her."

"Oh," he promptly declared—"charming!" But this word came out as if, a little, in sudden substitution for some other. It sounded accidental, whereas he wished to be firm. That accordingly was what he next showed himself. "If it wasn't for what's going on these next days Maggie would certainly want to have her. In fact," he lucidly continued, "isn't what's happening just a reason to MAKE her want to?" Mrs. Assingham, for answer, only looked at him, and this, the next instant, had apparently had more effect than if she had spoken. For he asked a question that seemed incongruous. "What has she come for!"

It made his companion laugh. "Why, for just what you say. For your marriage."

"Maggie's—it's the same thing. It's 'for' your great event. And then," said Mrs. Assingham, "she's so lonely."

"Has she given you that as a reason?"

"I scarcely remember—she gave me so many. She abounds, poor dear, in reasons. But there's one that, whatever she does, I always remember for myself."

"And which is that?" He looked as if he ought to guess but couldn't.

"Why, the fact that she has no home—absolutely none whatever.She's extraordinarily alone."

Again he took it in. "And also has no great means."

"Very small ones. Which is not, however, with the expense of railways and hotels, a reason for her running to and fro."

"On the contrary. But she doesn't like her country."

"Hers, my dear man?—it's little enough 'hers.'" The attribution, for the moment, amused his hostess. "She has rebounded now—but she has had little enough else to do with it."

"Oh, I say hers," the Prince pleasantly explained, "very much as, at this time of day, I might say mine....