The God-Idea of the Ancients or Sex in Religion 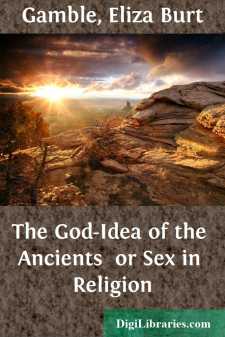 CHAPTER I. SEX THE FOUNDATION OF THE GOD-IDEA.

In the study of primitive religion, the analogy existing between the growth of the god-idea and the development of the human race, and especially of the two sex-principles, is everywhere clearly apparent.

"Religion is to be found alone with its justification and explanation in the relations of the sexes. There and therein only."(3)

As the conception of a deity originated in sex, or in the creative agencies female and male which animate Nature, we may reasonably expect to find, in the history of the development of the two sex-principles and in the notions entertained concerning them throughout past ages, a tolerably correct account of the growth of the god-idea. We shall perceive that during an earlier age of human existence, not only were the reproductive powers throughout Nature, and especially in human beings and in animals, venerated as the Creator, but we shall find also that the prevailing ideas relative to the importance of either sex in the office of reproduction decided the sex of this universal creative force. We shall observe also that the ideas of a god have always corresponded with the current opinions regarding the importance of either sex in human society. In other words, so long as female power and influence were in the ascendency, the creative force was regarded as embodying the principles of the female nature; later, however, when woman's power waned, and the supremacy of man was gained, the god-idea began gradually to assume the male characters and attributes.

Through scientific research the fact has been observed that, for ages after life appeared on the earth, the male had no separate existence; that the two sex-principles, the sperm and the germ, were contained within one and the same individual. Through the processes of differentiation, however, these elements became detached, and with the separation of the male from the female, the reproductive functions were henceforth confided to two separate individuals.

As originally, throughout Nature, the female was the visible organic unit within whom was contained the exclusive creative power, and as throughout the earlier ages of life on the earth she comprehended the male, it is not perhaps singular that, even after the appearance of mankind on the earth, the greater importance of the mother element in human society should have been recognized; nor, as the power to bring forth coupled with perceptive wisdom originally constituted the Creator, that the god-idea should have been female instead of male.

From the facts to be observed in relation to this subject, it is altogether probable that for ages the generating principle throughout Nature was venerated as female; but with that increase of knowledge which was the result of observation and experience, juster or more correct ideas came to prevail, and subsequently the great fructifying energy throughout the universe came to be regarded as a dual indivisible force—female and male. This force, or agency, constituted one God, which, as woman's functions in those ages were accounted of more importance than those of man, was oftener worshipped under the form of a female figure....