The Glory of English Prose Letters to My Grandson 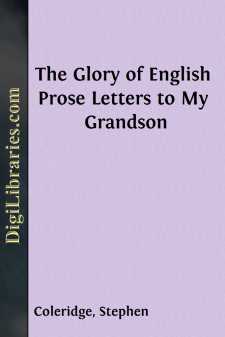 The letters which I wrote "On the world about you" having shown you that throughout all the universe, from the blazing orbs in infinite space to the tiny muscles of an insect's wing, perfect design is everywhere manifest, I hope and trust that you will never believe that so magnificent a process and order can be without a Mind of which it is the visible expression.

The chief object of those letters was to endorse your natural feeling of reverence for the Great First Cause of all things, with the testimony of your reason; and to save you from ever allowing knowledge of how the sap rises in its stalk to lessen your wonder at and admiration of the loveliness of a flower.

There is nothing so vulgar as an ignorant use of your own language. Every Englishman should show that he respects and honours the glorious language of his country, and will not willingly degrade it with his own pen or tongue.

"We have long preserved our constitution," said Dr. Johnson; "let us make some struggles for our language."

There is no need to be priggish or fantastic in our choice of words or phrases.

Simple old words are just as good as any that can be selected, if you use them in their proper sense and place.

By reading good prose constantly your ear will come to know the harmony of language, and you will find that your taste will unerringly tell you what is good and what is bad in style, without your being able to explain even to yourself the precise quality that distinguishes the good from the bad.

Any Englishman with a love of his country and a reverence for its language can say things in a few words that will find their way straight into our hearts, Antony, and make us all better men. I will tell you a few of such simple sayings that are better than any more laboured writings.

"To the undying memory of officers, non-commissioned officers and men of the 9th and 10th battalions of the K.O.Y.L.I. who were killed in the attack on Fricourt in the first battle of the Somme"; and below it there were placed these splendid words:—

"Gentlemen, when the barrage lifts."

In February of 1913 news reached England of the death, after reaching the South Pole, of four explorers, Captain Scott, their leader, among them.

Shortly before the end, Captain Oates, a man of fortune who joined the expedition from pure love of adventure, knowing that his helplessness with frozen feet was retarding the desperate march of the others towards their ship, rose up and stumbled out of the tent into a raging blizzard, saying, "I dare say I shall be away some time."

This was greatly said. His body was never found; but the rescue party who afterwards discovered the tent with the others dead in it, put up a cairn in the desolate waste of snow with this inscription:—