The Glaciers of the Alps Being a narrative of excursions and ascents, etc. 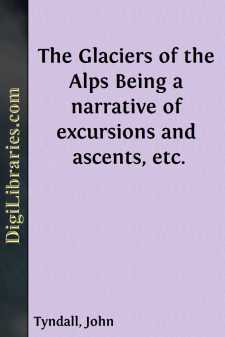 In the following work I have not attempted to mix Narrative and Science, believing that the mind once interested in the one, cannot with satisfaction pass abruptly to the other. The book is therefore divided into Two Parts: the first chiefly narrative, and the second chiefly scientific.

In Part I. I have sought to convey some notion of the life of an Alpine explorer, and of the means by which his knowledge is acquired. In Part II. an attempt is made to classify such knowledge, and to refer the observed phenomena to their physical causes.

The Second Part of the work is written with a desire to interest intelligent persons who may not possess any special scientific culture. For their sakes I have dwelt more fully on principles than I should have done in presence of a purely scientific audience. The brief sketch of the nature of Light and Heat, with which Part II. is commenced, will not, I trust, prove uninteresting to the reader for whom it is more especially designed.

Should any obscurity exist as to the meaning of the terms Structure, Dirt-bands, Regelation, Interference, and others, which occur in Part I., it will entirely disappear in the perusal of Part II.

Two ascents of Mont Blanc and two of Monte Rosa are recorded; but the aspects of nature, and other circumstances which attracted my attention, were so different in the respective cases, that repetition was scarcely possible.

The numerous interesting articles on glaciers which have been published during the last eighteen months, and the various lively discussions to which the subject has given birth, have induced me to make myself better acquainted than I had previously been with the historic aspect of the question. In some important cases I have stated, with the utmost possible brevity, the results of my reading, and thus, I trust, contributed to the formation of a just estimate of men whose labours in this field were long anterior to my own.

"Glaciers of the Alps" was published nearly six and thirty years ago, and has been long out of print, its teaching in a condensed form having been embodied in the little book called "Forms of Water." The two books are, however, distinct in character; each appears to me to supplement the other; and as the older work is still frequently asked for, I have, at the suggestion of my husband's Publishers, consented to the present reprint, which may be followed later on by a reprint of "Hours of Exercise."

Before reproducing a book written so long ago, I sought to assure myself that it contained nothing touching the views of others which my husband might have wished at the present time to alter or omit. With this object I asked Lord Kelvin to be good enough to read over for me the pages which deal with the history of the subject and with discussions in which he himself took an active part. In kind response he writes:—"... After carefully going through all the passages relating to those old differences I could not advise the omission of any of them from the reprint....