The Girl Scouts: A Training School for Womanhood 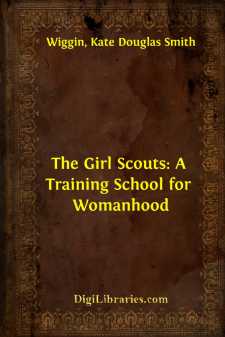 I am heartily interested in the Girl Scouts of America. The fact is, I think I was always a Girl Scout myself (although the name was unknown); yes, from the very beginning. Even my first youthful story was “scouty” in tone, if I may invent a word. Then for a few years afterward, when I was “scoutingly” busy educating little street Arabs in San Francisco, I wrote books, too, for and about younger children, but there came a time when “Polly Oliver's Problem” brought me a girl public. It was not an oppressively large one; that is, I never was mobbed in the streets by Polly's admirers, but they existed, and Heavens! how many letters they wrote!

I see now that “Polly” was a real girl scout, but faithful as she unconsciously was to the then unwritten laws of the sisterhood, she faded into insignificance when my absolutely true-to-type Scout appeared in the guise of Rebecca of Sunnybrook Farm. Rebecca did not reform, convert or uplift her seniors, her parents, grandparents, neighbors and constituents, but she could never keep her hands off things that needed to be done, and whatever enterprise was on hand there was Rebecca to be found—sometimes on the outskirts, frequently, I fear, in its storm centre.

Do you remember that it was Rebecca and her twelve-year-old friends who sewed the white stars on the Riverboro home-made flag, just as the Roosevelt High School girls have been doing for their great leader these last weeks?

My summer home lies between two Maine villages on opposite sides of the Saco River. There are Girl Scouts and Boy Scouts in each of the villages; but off the main roads, almost on the fringe of the pine forests, are boys and girls too far away from one another to reach any group. One little chap said to me: “My brother Tim wants to be a Scout, but there isn't anybody to be a leader and the boys live too far apart. Tim's got all the circulars and books and instructions and he can be a lone scout, but he doesn't want to be a lone scout—Tim doesn't; he wants to be with other boys.”

The very words “A lone scout” suggested a story to me that I have never written, but wish that these words might reach the eye of a girl who would like to practise the scout virtues, even if she cannot belong to the great band. It is hard, without the companionship and inspiration of a large friendly company, to follow a secret ideal and an imaginary leader, to be a lone scout yet to be working with thousands of unknown little sisters. All the while that the “lone scout” is learning to be a woman—true, brave, busy, thrifty, cheerful, she can say to herself: “To help a little is to do the work of the world.” That is the real slogan of the Girl Scouts since for the most part they do little duties, assume small responsibilities, carry the lighter burdens. Above all, they learn to “Carry on!” doing a woman's work in a woman's way, doing small things that women have always done as well as the new things that have opened to women, either by their own pluck or because men have at least given women a chance, and doing them patiently, self-forgettingly, with the old-fashioned touch of a woman's hand. The world isn't in need of women who are duplicates of men. A girl should try to be the best scout in the world, if it is in her to go so far, but she must remember that after all she is a Girl, not a Boy Scout....