The Girl from Keller's 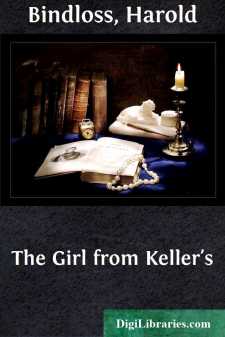 CHAPTER I THE PORTRAIT

It was getting dark when Festing stopped at the edge of a ravine on the Saskatchewan prairie. The trail that led up through the leafless birches was steep, and he had walked fast since he left his work at the half-finished railroad bridge. Besides, he felt thoughtful, for something had happened during the visit of a Montreal superintendent engineer that had given him a hint. It was not exactly disturbing, because Festing had, to some extent, foreseen the line the superintendent would take; but a post to which he thought he had a claim had been offered to somebody else. The post was not remarkably well paid, but since he was passed over now, he would, no doubt, be disappointed when he applied for the next, and it was significant that as he stood at the top of the ravine he first looked back and then ahead.

In the distance, a dull red glow marked the bridge, where the glare of the throbbing blast-lamps flickered across a muddy river, swollen by melting snow. He heard the ring of the riveters' hammers and the clang of flung-down rails. The whistle of a gravel train came faintly across the grass, and he knew that for a long distance gangs of men were smoothing the roughly graded track.

In front, everything was quiet. The pale-green sky was streaked along the horizon by a band of smoky red, and the gray prairie rolled into the foreground, checkered by clumps of birches and patches of melting snow. In one place, the figures of a man and horses moved slowly across the fading light; but except for this, the wide landscape was without life and desolate. Festing, however, knew it would not long remain a silent waste. A change was coming with the railroad; in a few years, the wilderness would be covered with wheat; and noisy gasoline tractors would displace the plowman's teams. Moreover, a change was coming to him; he felt that he had reached the trail fork and now must choose his path.

He was thirty years of age and a railroad builder, though he hardly thought he had much talent for his profession. Hard work and stubborn perseverance had carried him on up to the present, but it looked as if he could not go much farther. It was eight years since he began by joining a shovel gang, and he felt the lack of scientific training. He might continue to fill subordinate posts, but the men who came to the front had been taught by famous engineers and held certificates.

Yet Festing was ambitious and had abilities that sprang rather from character than technical knowledge, and now wondered whether he should leave the railroad and join the breakers of virgin soil. He knew something about prairie farming and believed that success was largely a matter of temperament. One must be able to hold on if one meant to win. Then he dismissed the matter for a time, and set off again with a firm and vigorous tread.

Spring had come suddenly, as it does on the high Saskatchewan plains, and he was conscious of a strange, bracing but vaguely disturbing quality in the keen air....