The Girl and the Kingdom Learning to Teach 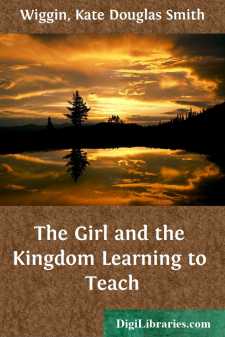 long, busy street in San Francisco. Innumerable small shops lined it from north to south; horse cars, always crowded with passengers, hurried to and fro; narrow streets intersected the broader one, these built up with small dwellings, most of them rather neglected by their owners. In the middle distance other narrow streets and alleys where taller houses stood, and the windows, fire escapes, and balconies of these, added great variety to the landscape, as the families housed there kept most of their effects on the outside during the long dry season.

Still farther away were the roofs, chimneys and smoke stacks of mammoth buildings—railway sheds, freight depots, power houses and the like—with finally a glimpse of docks and wharves and shipping. This, or at least a considerable section of it, was the kingdom. To the ordinary beholder it might have looked ugly, crowded, sordid, undesirable, but it appeared none of these things to the lucky person who had been invested with some sort of modest authority in its affairs.

The throne from which the lucky person viewed the empire was humble enough. It was the highest of the tin shop steps at the corner of Silver and Third streets, odd place for a throne, but one commanding a fine view of the inhabitants, their dwellings, and their activities. The activities in plain sight were somewhat limited in variety, but the signs sported the names of nearly every nation upon the earth. The Shubeners, Levis, Ezekiels and Appels were generally in tailoring or secondhand furniture and clothing, while the Raffertys, O'Flanagans and McDougalls dispensed liquor. All the most desirable sites were occupied by saloons, for it was practically impossible to quench the thirst of the neighborhood, though many were engaged in a valiant effort to do so. There were also in evidence, barbers, joiners, plumbers, grocers, fruit-sellers, bakers and venders of small wares, and there was the largest and most splendidly recruited army of do-nothings that the sun ever shone upon. These forever-out-of-workers, leaning against every lamp post, fence picket, corner house, and barber pole in the vicinity, were all male, but they were mostly mated to women fully worthy of them, their wives doing nothing with equal assiduity in the back streets hard by.—Stay, they did one thing, they added copiously to the world's population; and indeed it seemed as if the families in the community that ought to have had few children, or none at all, (for their country's good) had the strongest prejudice to race suicide. Well, there was the kingdom and there were the dwellers therein, and the lucky person on the steps was a girl. She did not know at first that it was a kingdom, and the kingdom never at any time would have recognized itself under that name, for it was anything but a sentimental neighborhood. The girl was somewhat too young for the work she was going to do, and considerably too inexperienced, but she had a kindergarten diploma in her pocket, and being an ardent follower of Froebel she thought a good many roses might blossom in the desert of Tar Flat, the rather uneuphonious name of the kingdom.

Here the discreet anonymity of the third person must be cast aside and the regrettable egotism of the first person allowed to enter, for I was a girl, and the modest chronicle of my early educational and philanthropic adventures must be told after the manner of other chronicles....