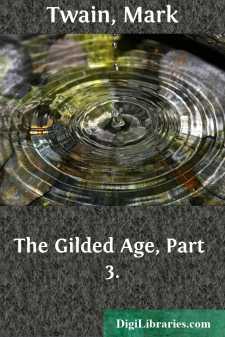 Mr. Harry Brierly drew his pay as an engineer while he was living at the City Hotel in Hawkeye. Mr. Thompson had been kind enough to say that it didn't make any difference whether he was with the corps or not; and although Harry protested to the Colonel daily and to Washington Hawkins that he must go back at once to the line and superintend the lay-out with reference to his contract, yet he did not go, but wrote instead long letters to Philip, instructing him to keep his eye out, and to let him know when any difficulty occurred that required his presence.

Meantime Harry blossomed out in the society of Hawkeye, as he did in any society where fortune cast him and he had the slightest opportunity to expand. Indeed the talents of a rich and accomplished young fellow like Harry were not likely to go unappreciated in such a place. A land operator, engaged in vast speculations, a favorite in the select circles of New York, in correspondence with brokers and bankers, intimate with public men at Washington, one who could play the guitar and touch the banjo lightly, and who had an eye for a pretty girl, and knew the language of flattery, was welcome everywhere in Hawkeye. Even Miss Laura Hawkins thought it worth while to use her fascinations upon him, and to endeavor to entangle the volatile fellow in the meshes of her attractions.

"Gad," says Harry to the Colonel, "she's a superb creature, she'd make a stir in New York, money or no money. There are men I know would give her a railroad or an opera house, or whatever she wanted—at least they'd promise."

Harry had a way of looking at women as he looked at anything else in the world he wanted, and he half resolved to appropriate Miss Laura, during his stay in Hawkeye. Perhaps the Colonel divined his thoughts, or was offended at Harry's talk, for he replied,

"No nonsense, Mr. Brierly. Nonsense won't do in Hawkeye, not with my friends. The Hawkins' blood is good blood, all the way from Tennessee. The Hawkinses are under the weather now, but their Tennessee property is millions when it comes into market."

"Of course, Colonel. Not the least offense intended. But you can see she is a fascinating woman. I was only thinking, as to this appropriation, now, what such a woman could do in Washington. All correct, too, all correct. Common thing, I assure you in Washington; the wives of senators, representatives, cabinet officers, all sorts of wives, and some who are not wives, use their influence. You want an appointment? Do you go to Senator X? Not much. You get on the right side of his wife. Is it an appropriation? You'd go 'straight to the Committee, or to the Interior office, I suppose? You'd learn better than that. It takes a woman to get any thing through the Land Office: I tell you, Miss Laura would fascinate an appropriation right through the Senate and the House of Representatives in one session, if she was in Washington, as your friend, Colonel, of course as your friend."

"Would you have her sign our petition?" asked the Colonel, innocently.

Harry laughed. "Women don't get anything by petitioning Congress; nobody does, that's for form. Petitions are referred somewhere, and that's the last of them; you can't refer a handsome woman so easily, when she is present. They prefer 'em mostly."

The petition however was elaborately drawn up, with a glowing description of Napoleon and the adjacent country, and a statement of the absolute necessity to the prosperity of that region and of one of the stations on the great through route to the Pacific, of the, immediate improvement of Columbus River; to this was appended a map of the city and a survey of the river. It was signed by all the people at Stone's Landing who could write their names, by Col. Beriah Sellers, and the Colonel agreed to have the names headed by all the senators and representatives from the state and by a sprinkling of ex-governors and ex-members of congress. When completed it was a formidable document. Its preparation and that of more minute plots of the new city consumed the valuable time of Sellers and Harry for many weeks, and served to keep them both in the highest spirits.

In the eyes of Washington Hawkins, Harry was a superior being, a man who was able to bring things to pass in a way that excited his enthusiasm. He never tired of listening to his stories of what he had done and of what he was going to do. As for Washington, Harry thought he was a man of ability and comprehension, but "too visionary," he told the Colonel. The Colonel said he might be right, but he had never noticed anything visionary about him.

"He's got his plans, sir. God bless my soul, at his age, I was full of plans. But experience sobers a man, I never touch any thing now that hasn't been weighed in my judgment; and when Beriah Sellers puts his judgment on a thing, there it is."

Whatever might have been Harry's intentions with regard to Laura, he saw more and more of her every day, until he got to be restless and nervous when he was not with her.

That consummate artist in passion allowed him to believe that the fascination was mainly on his side, and so worked upon his vanity, while inflaming his ardor, that he scarcely knew what he was about. Her coolness and coyness were even made to appear the simple precautions of a modest timidity, and attracted him even more than the little tendernesses into which she was occasionally surprised. He could never be away from her long, day or evening; and in a short time their intimacy was the town talk. She played with him so adroitly that Harry thought she was absorbed in love for him, and yet he was amazed that he did not get on faster in his conquest.

And when he thought of it, he was piqued as well. A country girl, poor enough, that was evident; living with her family in a cheap and most unattractive frame house, such as carpenters build in America, scantily furnished and unadorned; without the adventitious aids of dress or jewels or the fine manners of society—Harry couldn't understand it. But she fascinated him, and held him just beyond the line of absolute familiarity at the same time. While he was with her she made him forget that the Hawkins' house was nothing but a wooden tenement, with four small square rooms on the ground floor and a half story; it might have been a palace for aught he knew....