The Ghost Ship A Mystery of the Sea 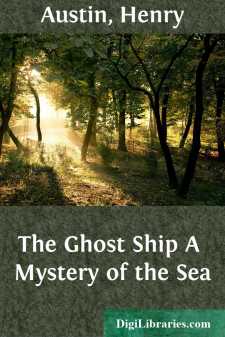 The Star of the North.

The sun sank below the horizon that evening in a blaze of ruby and gold.

It flooded the whole ocean to the westward, right up to the very zenith, with a wealth of opalescent light that transformed sea and sky alike into a living glory, so grand and glorious was the glowing harmony of kaleidoscopic colouring which lit up the arc of heaven and the wide waste of water beneath, stretching out and afar beyond ken. Aye, and a colouring, too, that changed its hue each instant with marvellous rapidity, tint alternating with tint, and tone melting into tone in endless succession and variety!

Throughout the day the weather had looked more than threatening. From an early hour of the morning the wind had been constantly veering and shifting, showing a strong inclination to back; and now the sea was getting up and the white horses of Neptune had already begun to gambol over the crests of the swelling billows, which heaved up and down as they rolled onward with a heavy moaning sound, like one long, deep-drawn sigh!

It looked as if the old monarch below, angered by the teasing of the frolicsome zephyrs, was gradually working himself up into a passion, which would vent itself, most probably, ere long in a much more telling fashion than by this melancholy moan, so different to the sea-god’s usual voice of thunder!

Yes, it looked threatening enough in all conscience!

A brisk breeze had been blowing from the nor’-east before breakfast, but this had subsequently shifted to the nor’ard at noon, veering back again, first to the nor’-east and then to due east in the afternoon. The wind freshened as the hours wore on, being now accompanied towards sunset by frequent sharp gusts, a sign betokening plainly enough to a seaman’s eye that something stiffer was brewing up for us by-and-by.

Glancing over the side, I noticed that our brave vessel, the Star of the North, was becoming very uneasy.

She was running under her jib and foresail, with fore-topsail and fore-topgallantsail, being only square rigged forwards, like most ocean steamers; but, in order to save coals and ease the engines, the skipper had set the fore and main trysails with gaff-topsails and staysails as well, piling on every rag he could spread.

With this press of canvas topping her unaccustomed hull, the poor old barquey heeled over more and more as the violent gusts caught her broadside-on at intervals, rolling, too, a bit on the wind fetching round aft; while, her stern lifting as some bigger roller than usual passed under her keel, the screw would whiz round aimlessly in mid air, from missing its grip of the water, “racing,” as sailors say in their lingo, with a harsh grating jar that set my teeth on edge, and seemed to vibrate through my very spinal marrow as I stood for a moment on the line of deck immediately over the revolving shaft.

At the same time also that the afterpart of the vessel rose up on the breast of one billowy mountain, her forefoot in turn would come down with a resonant “thwack” into the valley intervening between this roller and the next, the buoyant old barquey dipping her bows under and giving the star-crowned maiden with golden ringlets, that did duty for her figurehead, an impromptu shower bath as she parted the indignant waves with her glistening black hull, sending them off on either hand with a contemptuous “swish” on their trying in mad desperation to leap on board, first to port and then to starboard, as the ship listed in her roll....