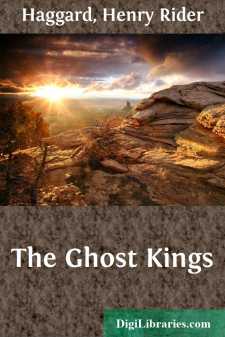 CHAPTER I THE GIRL

The afternoon was intensely, terribly hot. Looked at from the high ground where they were encamped above the river, the sea, a mile or two to her right—for this was the coast of Pondo-land—to little Rachel Dove staring at it with sad eyes, seemed an illimitable sheet of stagnant oil. Yet there was no sun, for a grey haze hung like a veil beneath the arch of the sky, so dense and thick that its rays were cut off from the earth which lay below silent and stifled. Tom, the Kaffir driver, had told her that a storm was coming, a father of storms, which would end the great drought. Therefore he had gone to a kloof in the mountains where the oxen were in charge of the other two native boys—since on this upland there was no pasturage to drive them back to the waggon. For, as he explained to her, in such tempests cattle are apt to take fright and rush away for miles, and without cattle their plight would be even worse than it was at present.

At least this was what Tom said, but Rachel, who had been brought up among natives and understood their mind, knew that his real reason was that he wished to be out of the way when the baby was buried. Kaffirs do not like death, unless it comes by the assegai in war, and Tom, a good creature, had been fond of that baby during its short little life. Well, it was buried now; he had finished digging its resting-place in the hard soil before he went. Rachel, poor child, for she was but fifteen, had borne it to its last bed, and her father had unpacked his surplice from a box, put it on and read the Burial Service over the grave. Afterwards together they had filled in that dry, red earth, and rolled stones on to it, and as there were few flowers at this season of the year, placed a shrivelled branch or two of mimosa upon the stones—the best offering they had to make.

Rachel and her father were the sole mourners at this funeral, if we may omit two rock rabbits that sat upon a shelf of stone in a neighbouring cliff, and an old baboon which peered at these strange proceedings from its crest, and finally pushed down a boulder before it departed, barking indignantly. Her mother could not come because she was ill with grief and fever in a little tent by the waggon. When it was all over they returned to her, and there had been a painful scene.

Mrs. Dove was lying on a bed made of the cartel, or frame strung with strips of green hide, which had been removed from the waggon, a pretty, pale-faced woman with a profusion of fair hair. Rachel always remembered that scene. The hot tent with its flaps turned up to let in whatever air there might be. Her mother in a blue dressing-gown, dingy with wear and travel, from which one of the ribbon bows hung by a thread, her face turned to the canvas and weeping silently. The gaunt form of her father with his fanatical, saint-like face, pale beneath its tan, his high forehead over which fell one grizzled lock, his thin, set lips and far-away grey eyes, taking off his surplice and folding it up with quick movements of his nervous hands, and herself, a scared, wondering child, watching them both and longing to slip away to indulge her grief in solitude....