The German Element in Brazil Colonies and Dialect 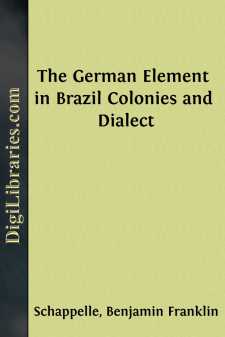 CHAPTER I. THE COLONIES. HISTORY AND LOCATION. THE FIRST SETTLERS.

The first reference to German settlers in Brazil we have from the pen of Hans Stade of Homberg in Hessen. Stade made two trips to Brazil; one in 1547 and one in 1549. In the latter instance he was shipwrecked but succeeded in landing safely near the present port of Santos in the state of São Paulo. As he was a skilled artillerist the Portuguese made him commander of the fort Bertioga, the ruins of which are an interesting landmark to this day. Later Stade spent several most trying years as the captive of a cannibalistic tribe.

After his return to Germany, Stade published an account of his experiences. The first edition entitled "Wahrhafftige Historia unnd beschreibung einer landschafft der Wilden, Nacketen, Grimmigen, Menschfresser Leuthen in der Newen Welt America gelegen, ..." appeared at Marburg in 1557. In this work Stade refers to two of his fellow-countrymen located in Brazil; the one Heliodorus Eoban of Hessen, who had charge of a sugar-refinery on the island of São Vicente (near Santos); the other Peter Rösel, who was located in Rio de Janeiro as the representative for a business firm of Antdorff.

Next we come to Manuel Beckmann, the son of a German who had located in Lisbon. He is known in history as Manoel Bequimão and was the leader in the Maranhão revolution of 1684. This uprising, altho it came to grief, may be regarded as the first of a long series of protests against the home government resulting in the declaration of the independence of Brazil on the field at Ypiranga, September 2d, 1822. Beckmann died a martyr's death at Rio on November 2, 1685. His younger brother, Thomas Beckmann, who had also taken part in the revolution, was acquitted.

In the 18th-century there was another important German figure in Brazilian history; that of Lieutenant-General Johann Heinrich von Böhm. It was von Böhm who, at the head of Portuguese troops, recaptured the city of Rio Grande in Rio Grande do Sul from the Spaniards in 1777. Von Böhm was assisted by two other German officers, i.e., the Count of Lippe and Marschal Funk. These three characters were in a sense the forerunners of the German battalions brought into Brazil by the First Empire in the early part of the following century.

The first colonization of importance by Germans in Brazil did not take place until the early part of the 19th century. Beginning with that century there was a steady stream of non-Portuguese settlers into the country, and of these the Germans formed an important part.

The following is a résumé of the German colonies in Brazil and a brief introduction to their history.

For the sake of convenience, the colonies have been divided:

First; according to the states in which they are located.

Second; according to the date of founding.

Third; according to the kind of colony administratively at the time of founding. As to this they fall under three categories:

a) Private colonies, i.e., founded by a private individual or corporation....