The German Classics of the Nineteenth and Twentieth Centuries, Volume 08 Masterpieces of German Literature Translated into English 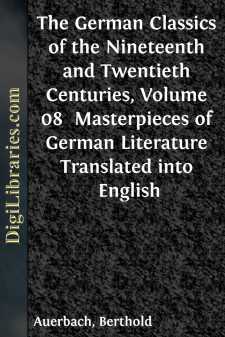 CHAPTER I THE CHILDREN KNOCK AT THE DOOR

Early in the morning through the autumnal mist two children of six or seven years are wending their way, hand in hand, along the garden-paths outside the village. The girl, evidently the elder of the two, carries a slate, school-books, and writing materials under her arm; the boy has a similar equipment, which he carries in an open gray linen bag slung across his shoulder. The girl wears a cap of white twill, that reaches almost to her forehead, and from beneath it the outline of her broad brow stands forth prominently; the boy's head is bare. Only one child's step is heard, for while the boy has strong shoes on, the girl is barefoot. Wherever the path is broad enough, the children walk side by side, but where the space between the hedges is too narrow for this, the girl walks ahead.

The white hoar frost has covered the faded leaves of the bushes, and the haws and berries; and the flips especially, standing upright on their bare stems, seem coated with silver. The sparrows in the hedges twitter and fly away in restless groups at the children's approach; then they settle down not far off, only to go whirring up again, till at last they flutter into a garden and alight in an apple-tree with such force that the leaves come showering down. A magpie flies up suddenly from the path and shoots across to the large pear-tree, where some ravens are perched in silence. The magpie must have told them something, for the ravens fly up and circle round the tree; one old fellow perches himself on the waving crown, while the others find good posts of observation on the branches below. They, too, are doubtless curious to know why the children, with their school things, are following the wrong path and going out of the village; one raven, indeed, flies out as a scout and perches on a stunted willow by the pond. The children, however, go quietly on their way till, by the alders beside the pond, they come upon the high-road, which they cross to reach a humble house standing on the farther side. The house is locked up, and the children stand at the door and knock gently. The girl cries bravely: "Father! mother!"—and the boy timidly repeats it after her: "Father! mother!" Then the girl takes hold of the frost-covered latch and presses it, at first gently, and listens; the boards of the door creak, but there is no other result. And now she ventures to rattle the latch up and down vigorously, but the sounds die away in the empty vestibule—no human voice answers. The boy then presses his mouth to a crack in the door and cries: "Father! mother!" He looks up inquiringly at his sister—his breath on the door has also turned to hoar frost.

From the village, lying in a shroud of mist, come the measured sounds of the thresher's flail, now in sudden volleys, now slowly and with a dragging cadence, now in sharp, crackling bursts, and now again with a dull and hollow beat. Sometimes there is the noise of one flail only, but presently others have joined in on all sides....