The German Classics of the Nineteenth and Twentieth Centuries Masterpieces of German Literature Vol. 19 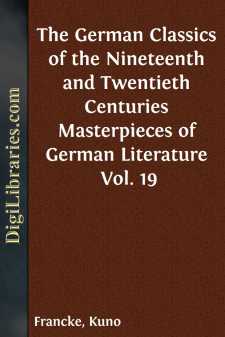 The last two volumes of this comprehensive publication are devoted to the living, the writers of the present who sow the seed from which shall grow the future of German letters. But who can speak of prophecy or prevision, at a moment when all who call themselves German are compelled to fight for their existence, and the future of German nationality as well as of German culture is hidden by the smoke of battle? To the four quarters of the globe the wild alarm Germania est delenda is trumpeted as a so-called duty of human civilization; isolated Germany can respond only with her resolute Victory or Death. What shall be the end? Shall this war of the nations, unparalleled in history, mean for Germany the destruction of all her material and spiritual possessions, as they were destroyed during the thirty years of horror in the seventeenth century? Or has Germany, thrown upon her own resources, attained to full consciousness of her strength, and now at last repaired the damage of that national calamity, which devastated her territory, subjected her to foreign domination, and continued to retard her progress for two full centuries?

Who can foretell whether the heroism of a mighty time, whose dawn we see, is to give new inspiration to patriotic poetry for centuries to come, and beget a new generation of bards worthy to sing of arms and men? The spirit of self-sacrificing devotion which waged the Seven Years' War and the Wars of Liberation has returned to animate the Germany of today. Who knows, however, but that many a precious life will be sacrificed from which we hoped for great things even in our literature, and which now sheds its blood in a struggle for the warrior's laurel wreath? For German poets have also heard the call to arms; and those who have not, like Ganghofer, despite his sixty years, and Dehmel with his fifty-one, joined the ranks of the volunteers, tune their lyres to Tyrtæan measures and enlist their pens in the service of their native land. Thus Gerhart Hauptmann, who only a year ago concluded his dramatic celebration of the centennial of German liberation with an apotheosis of peace, now comes forward with stirring war songs.

Is this still the people to which Goethe belonged? At a time when a common cause with Austria conjures up again the shade of the dear old Holy Roman Empire no other verse in Faust seems so inept as that concerning the ugly political song. Today we should rather say "An unpolitical song, an ugly song;" for to the people that but a few weeks ago was mindful of naught but works of peace everything has become a matter of indifference except the burning question of the hour. Even though the longed-for peace should soon return, the year 1914 must leave a deep mark in the development of German literature. As yet we can only look back, not forward, from this milestone; and even in so doing we cannot escape from the present.

One thing the very first days of the war have made manifest: the physical and moral strength and the healthy marrow of the German people. Our literature, as the most faithful mirror of national life, has reflected in the past ten years this incorruptible healthfulness, and if we look somewhat farther back, we even see something resembling a process of convalescence. It was possible in 1903 for a novel Jena or Sedan by Franz Adam Beyerlein to create a sensation. Written in the manner of Zola, the book, which, because of an alleged dry rot in the German army, prophesied mischance in the future, produced its effect not so much through an apparently objective but gloomy depiction of life in the garrisons, as through the nourishment that it gave to the torturing doubts which during the last decades of the nineteenth century grew rank as a fatalistic pessimism. The very principle of naturalism as a form of art, with its one-sided preference for disease, crime, and weakness, flourished on the offal of a materialistic philosophy of life, which viewed the vanity of existence with weary resignation. But this disease of the times was as little a specifically German malady as the naturalism imported from France and Russia was a genuine form of German art....