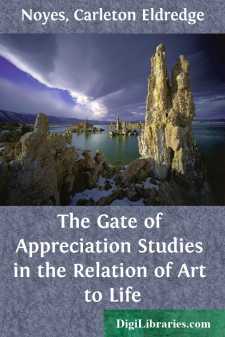 IN the daily life of the ordinary man, a life crowded with diverse interests and increasingly complex demands, some few moments of a busy week or month or year are accorded to an interest in art. Whatever may be his vocation, the man feels instinctively that in his total scheme of life books, pictures, music have somewhere a place. In his own business or profession he is an expert, a man of special training; and intelligently he does not aspire to a complete understanding of a subject which lies beyond his province. In the same spirit in which he is a master of his own craft, he is content to leave expert knowledge of art to the expert, to the artist and to the connoisseur. For his part as a layman he remains frankly and happily on the outside. But he feels none the less that art has an interest and a meaning even for him. Though he does not practice any art himself, he knows that he enjoys fine things, a beautiful room, noble buildings, books and plays, statues, pictures, music; and he believes that in his own fashion he is able to appreciate art, I venture to think that he is right.

There is a case for the outsider in reference to art. And I have tried here to state it. This book is an attempt to suggest the possible meaning of art to the ordinary man, to indicate methods of approach to art, and to trace the way of appreciation. It is essentially a personal record, an account of my own adventures with the problem. The book does not pretend to finality; the results are true for me as far as I have gone. They may or may not be true for another. If they become true for another man, he is the one for whom the book was written. I do not apologize because the shelter here put together, in which I have found a certain comfort, is not a palace. Rude as the structure may be, any man is welcomed to it who may find solace there in an hour of need.

THE IMPULSE TO EXPRESSION

TOWARD evening a traveler through a wild country finds himself still in the open, with no hope of reaching a village that night. The wind is growing chill; clouds are gathering in the west, threatening rain. There rises in him a feeling of the need of shelter; and he looks about him to see what material is ready to his hand. Scattered stones will serve for supports and low walls; there are fallen branches for the roof; twigs and leaves can be woven into a thatch. Already the general design has shaped itself in his mind. He sets to work, modifying the details of his plan to suit the resources of his material. At last, after hours of hard thought and eager toil, spurred on by his sense of his great need, the hut is ready; and fee takes refuge in it as the storm breaks.

The entire significance of the man's work is shelter. The beginning of it lay in his need of shelter. The impulse to action rose out of his consciousness of his need. His imagination conceived the plan whereby the need might be met, and the plan gave shape to his material....