The Garden of the Plynck 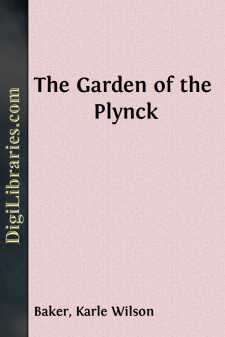 Grown people have such an exasperating way of saying, "Now, when I was a little girl—"

Then, just as you prick up the little white ears of your mind for a story, they finish, loftily, "I did—or didn't do—so-and-so."

It is certainly an underhand way of suggesting that you stop doing something pleasant, or begin doing something unpleasant; and you would not have thought that Sara's dear mother would have had so unworthy a habit. But a stern regard for the truth compels me to admit that she had.

You see, Sara's dear mother was, indeed, most dear; but very self-willed and contrary. Her great fault was that she was always busy at something. She would darn, and she would write, and she would read dark-colored books without pictures. When Sara compared her with other mothers of her acquaintance, or when this very contrary own-mother went away for a day, she seemed indeed to Sara quite desperately perfect. But on ordinary days Sara was darkly aware, in the clearest part of her mind—the upper right-hand corner near the window—that her mother, with all her charm, really did need to be remoulded nearer to her heart's desire.

She was especially clear about this on the frequent occasions when she would come into the room where her mother was sitting, and plump down upon a chair with a heart-rending sigh, and say, "I wish I had somebody to play with!"

For then her dear but most contrary mother would glance up from her book or her darning and remark, with a calm smile,

"When I was a little girl—"

"I used to go inside my head and play."

And Sara would answer with a poor, vindictive satisfaction, "There's nothing in my head to play with!"

And her kind-hearted mother would snip off her thread and say gently, in a tone of polite regret, "Poor little girl!"

Then Sara would gnash the little milk-teeth of her mind and have awful thoughts. The worst she ever had came one day when Mother, who had already filled about fourteen pages of paper with nothing in the world but words, acted that way again. And just as she said, "Poor little girl!" Sara thought, "I'd like to take that sharp green pencil and stick it into Mother's forehead, and watch a story run out of her head through the hole!"

But that was such an awful thought that she sent it scurrying away, as fast as she could. Just the same, she said to herself, if Mother ever acted that way again—

And, after all, Mother did. And that was the fatal time—the four-thousand-and-fourth. For, after Mother had suggested it four thousand and four times, it suddenly occurred to Sara that she might try it.

So she shut the doors and went in.

Yes, I said shut the doors and went in; for that is what you do when you go into your head. The doors were of ivory, draped with tinted damask curtains which were trimmed with black silk fringe. The curtains fell noiselessly behind Sara as she entered.

And there in the Gugollaph-tree by the pool sat the Plynck, gazing happily at her Echo in the water.

She was larger than most Plyncks; about the size of a small peacock....