The Gaming Table: Its Votaries and Victims Volume II (of II) 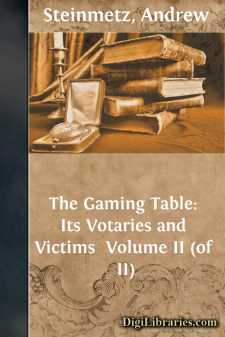 Chevaliers d'industrie, or polite and accomplished sharpers, have always existed in every city, from the earliest times to the present. The ordinary progress of these interesting gentlemen is as follows. Their debut is often difficult, and many of them are stopped short in their career. They only succeed by means of great exertion and severe trials; but they endure everything in order to be tolerated or permitted to exercise their calling. To secure credit they ally themselves with men of respectability, or those who pass for such. When they have no titles they fabricate them; and few persons dispute their claims. They are found useful for the pleasures of society, the expenses of which they often pay—at the cost of the dupes they make in the world. The income of chevaliers d'industrie is at first derived from those inexperienced persons whom they get in their clutches by means of every kind of enticement, in order to ruin them some day—if they have any 'expectations' or are likely to be rich; or in order to make accomplices of them if they have only aptitudes for the purpose. After having led them from error to error, after suggesting to them all sorts of wants and vices, they make them gamble, if they are of age; they hold up play to them as an inexhaustible source of wealth.

The 'protector' next hands over his 'young friends' to 'executioners,' who fleece them for the common benefit of the confederates. They do not always wait for the coming of age of their young dupes in order to strike the grand 'stroke.' When they find that the father of a family shudders at the idea of a public scandal, they immolate their victim at once—for fear lest he should escape from their hands. Of course they are always open to 'capitulate'—to come to terms; and if the aid of the law is invoked they give in discreetly.

About a century ago there flourished at Paris one of these adventurers, who made a great noise and did a vast amount of evil. This man of a thousand faces, this Proteus, as great a corrupter as he was corrupted, changed his name, his quarters, and field of operations, according to the exigences of business. Although a man of ardent temperament and inconceivable activity, his cold-blooded rascality was never in a hurry. He could wait; he could bide his time. Taking in, at a glance, all the requirements of a case, and seeing through all its difficulties, he worked out his scheme with the utmost patience and consummated his crime with absolute security.

Sometimes he gave a concert for amateurs, elegant suppers for gay ladies, and special soirees for the learned and the witty. He was not particular as to the means of doing business; thus he trafficked in everything,—for the sale of a living, or the procuration of a mistress—for he had associates in all ranks, among all professions of men.

He had twenty Faro tables in operation every night, whilst his emissaries were on the watch for new arrivals, and for those who had recently come into property....