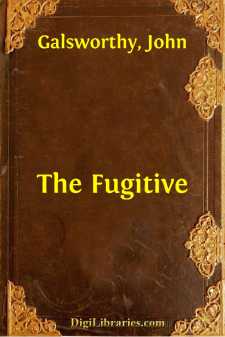 ACT I The SCENE is the pretty drawing-room of a flat. There are twodoors, one open into the hall, the other shut and curtained.Through a large bay window, the curtains of which are not yetdrawn, the towers of Westminster can be seen darkening in asummer sunset; a grand piano stands across one corner. Theman-servant PAYNTER, clean-shaven and discreet, is arranging twotables for Bridge.BURNEY, the maid, a girl with one of those flowery Botticellianfaces only met with in England, comes in through the curtaineddoor, which she leaves open, disclosing the glimpse of a whitewall. PAYNTER looks up at her; she shakes her head, with anexpression of concern.

BURNEY. Just walks about, I fancy.

PAYNTER. She and the Governor don't hit it! One of these days she'll flit—you'll see. I like her—she's a lady; but these thoroughbred 'uns—it's their skin and their mouths. They'll go till they drop if they like the job, and if they don't, it's nothing but jib—jib—jib. How was it down there before she married him?

PAYNTER. Not a penny, I suppose?

BURNEY. [Shaking her head] No; and seven of them.

PAYNTER. [At sound of the hall door] The Governor!

BURNEY withdraws through the curtained door.GEORGE DEDMOND enters from the hall. He is in evening dress,opera hat, and overcoat; his face is broad, comely, glossilyshaved, but with neat moustaches. His eyes, clear, small, andblue-grey, have little speculation. His hair is well brushed.

GEORGE. [Handing PAYNTER his coat and hat] Look here, Paynter! When I send up from the Club for my dress things, always put in a black waistcoat as well.

PAYNTER. I asked the mistress, sir.

PAYNTER. Yes, sir. [Signing towards the window] Shall I leave the sunset, sir?

But GEORGE has crossed to the curtained door; he opens it andsays: "Clare!" Receiving no answer, he goes in. PAYNTERswitches up the electric light. His face, turned towards thecurtained door, is apprehensive.

PAYNTER. She had a mere nothing at seven, sir.

GEORGE. Has she gone out, since?

PAYNTER. Yes, sir—that is, yes. The—er—mistress was not dressed at all. A little matter of fresh air, I think; sir.

GEORGE. What time did my mother say they'd be here for Bridge?

PAYNTER. Sir Charles and Lady Dedmond were coming at half-past nine; and Captain Huntingdon, too—Mr. and Mrs. Fullarton might be a bit late, sir.

GEORGE. It's that now. Your mistress said nothing?

PAYNTER. Not to me, sir.

GEORGE. Did your mistress say anything before she went out?