The Frontiersman A Tale of the Yukon 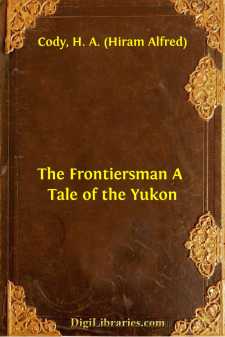 CHAPTER I NIGHT IN THE WILDERNESS

Creek, swish! Creek, swish! hour after hour sounded forth the yielding snowshoes as Keith Steadman, hardy northman and trailsman, strode rapidly forward. For days he had listened to their monotonous music, as he wound his devious way over valleys, plains, and mountain passes, down toward the mighty Yukon River, pulsing on to the sea through the great white silence.

There was snow everywhere. Snow on the river, sparkling like a million diamonds; snow on the lakes, lying smooth and white. Snow on the trees, hanging in beautiful, fairy-like clusters; snow on the sun-kissed mountains, fleecy, golden, drifting. Snow, frosty, hard, surrounding the traveller, pouring into his lungs at every breath, clinging to his eyebrows, whitening his unkempt beard, and decorating the furry fringes of his loose parka.

"Cold night," he muttered to himself, as he paused to readjust the rope of the small sled he was drawing, to the right shoulder.

Then he glanced back over the trail, and a dark object arrested his attention, drawing nearer and nearer.

"A wolf! and on my track, too! I expected as much in this desolate spot," and the traveller unslung the small rifle from his back and stood ready for action.

For some time the animal did not look up, but kept its nose close to the ground, and trotted steadily on. Then it lifted its head, slowed down to a walk, and at length stopped.

"I don't like that brute on my track at this time of the day," thought Keith. "Perhaps a leaden message may give it a hint to travel elsewhere."

He raised his rifle to his shoulder and took aim. Then he lowered it, moved by some sudden impulse. "Why, I believe it's a dog, not a wolf at all," and he gave a sharp whistle to the watching animal.

The dog, for so it was, pricked up its ears, moved forward, and stopped; but no coaxing on the traveller's part could induce it to advance any further. After trying in vain for some time to make friends with the cur, Keith resumed his weary walk.

The short winter day was drawing to a close, and the sun had dipped behind a tall, hoary peak. The shadows stealing over the land warned him that night was shutting down, and camping time was near.

Ahead lay a clump of thick fir trees, which promised shelter and an abundance of wood. Toward this he moved, the dog following some distance behind. Reaching the place, it did not take him long to clear away the snow from a suitable spot, using one of his narrow snow-shoes as a shovel. This done, he built a fire from the dead trees standing close by, and prepared a generous supply of fuel to last during the cold night. With much skill, acquired through long practice, he soon fashioned a cosy little nest on one side of the fire, from the richly-scented fir boughs. To make the shelter more complete, he erected in the background a brush barricade in the form of a semi-circle, a few feet high. In front of this he spread a wolf-skin robe.

"A palace fit for a king," he remarked, half aloud, as he glanced around upon his handiwork....