The Four-Faced Visitors of Ezekiel 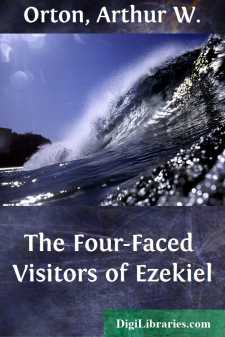 e are told from our Sunday School days that the Bible is a "living book," the oldest of man's written works that is read and used anew, from generation to generation. It remains "living" because we are able to find new meaning to fit our daily lives. Although it is not the usual kind of new meaning, I believe that I have found something of the sort in the very old prophesies of Ezekiel.

Bible scholars have long recognized the first chapter of Ezekiel as a strange and nearly unfathomable account of a vision. I suggest that it is strange only because it is written by a man far removed from us in time and experience, about a subject totally unfamiliar to men of his time. I do not think that this was a vision in the usual sense, nor was it meant to be mystical. This particular chapter has been called "Science fiction in the Bible" and many attempts have been made to unravel the meaning of the original author, along both spiritual and mundane lines. I am convinced that this chapter is the account of an actual happening; the landing of extraterrestial beings, reported by a careful, truthful and self-possessed observer.

I am not a student of theology and therefore you may feel that I am being presumptive in attempting to throw light on a mystery as old and well-studied as Ezekiel's first chapter. I feel that any success that I may have in doing so will be due to the accident of my birth at the very beginning of an era when the events I have to describe are fact, or are about to become fact.

If, as I believe, this is an account of an actual encounter with men from space, I may be better able to interpret the meaning than a student of theology, who by training and interest, is looking for a theological meaning. I have worked with mechanical things, and as an instructor of aircraft mechanics for most of my adult life. During this time I have had to untangle a lot of mechanical misconceptions and misunderstandings. I think that this gives me some insight into this problem.

If you are not too familiar with the Old Testament, I suggest that you read through the first chapter of Ezekiel to get the feeling of the flow of words, and a general idea of what sort of material we will be covering. If you have done a considerable amount of reading in the Bible, I am sure you will notice at once how different and "un-Bible-like" this chapter sounds. It isn't long. The first chapter covers little more than one page. Don't expect to get a clear picture the first time through. It seems to have an elusive quality. About the time you feel that you have hold of a fact, it seems to be contradicted in a later verse. I am going to try to show you that this is due to your own preconceived notions of what some of the words and phrases mean. You, not Ezekiel, are supplying the contradictions.

You will see that I am not going to make excuses for the words, as written. It is my belief that those who had the task of translating the Bible from its original tongue and re-copying it through the ages were particularly careful of this chapter because they did not understand it and were afraid of damaging it.

Let us begin with the first verse of chapter one:

The Book of The Prophet EZEKIEL

Now it came to pass in the thirtieth year, in the fourth month, in the fifth day of the month, as I was among the captives by the river of Chebar, that the heavens were opened, and I saw visions of God....