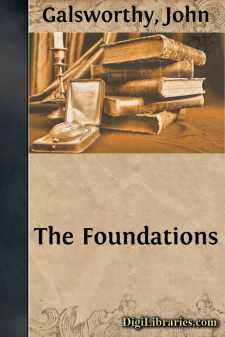 LORD WILLIAM DROMONDY'S mansion in Park Lane. Eight o'clock of the evening. LITTLE ANNE DROMONDY and the large footman, JAMES, gaunt and grin, discovered in the wine cellar, by light of gas. JAMES, in plush breeches, is selecting wine.

JAMES. No, my proper name's John.

L. ANNE. Oh! [A pause] And is Charles's an improper name too?

L. ANNE. Then is Thomas Matthew?

L. ANNE. No, but James—Henry might be Luke, really?

L. ANNE. Who gave you those names? Not your godfathers and godmothers?

JAMES. Poulder. Butlers think they're the Almighty. [Gloomily] But his name's Bartholomew.

L. ANNE. Which do you like to be called—John or James?

JAMES. I don't give a darn.

JAMES. 'Tain't in the dictionary.

L. ANNE. How many bottles have you got to pick out?

L. ANNE. Are they all for the dinner, or for the people who come in to the Anti-Sweating Meeting afterwards?

JAMES. All for the dinner. They give the Sweated—tea.

L. ANNE. All for the dinner? They'll drink too much, won't they?

JAMES. We've got to be on the safe side.

L. ANNE. Will it be safer if they drink too much?

[JAMES pauses in the act of dusting a bottle to look at her, asif suspecting irony.]

JAMES. That's the escape of gas.

L. ANNE. Has the plumber's man been?

L. ANNE. What is a little blighter? Can I see?

L. ANNE. [Straying] Oh!... James, are these really the foundations?

JAMES. You might 'arf say so. There's a lot under a woppin' big house like this; you can't hardly get to the bottom of it.

L. ANNE. Everything's built on something, isn't it? And what's THAT built on?

L. ANNE. If you wanted to blow it up, though, you'd have to begin from here, wouldn't you?

JAMES. Who'd want to blow it up?

L. ANNE. It would make a mess in Park Lane.

JAMES. I've seen a lot bigger messes than this'd make, out in the war.

L. ANNE. Oh! but that's years ago! Was it like this in the trenches, James?

JAMES. [Grimly] Ah! 'Cept that you couldn't lay your 'and on a bottle o' port when you wanted one.

JAMES. [On guard] I only suggest it's possible.

JAMES. [Icily] I say nothin' about that.

L. ANNE. Oh! Do say something!

JAMES. I'm ashamed of you, Miss Anne, pumpin' me!

L. ANNE. [Reproachfully] I'm not pumpin'! I only want to make Poulder jump when I ask him....