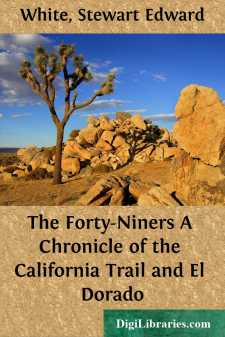 The dominant people of California have been successively aborigines, conquistadores, monks, the dreamy, romantic, unenergetic peoples of Spain, the roaring melange of Forty-nine, and finally the modern citizens, who are so distinctive that they bid fair to become a subspecies of their own. This modern society has, in its evolution, something unique. To be sure, other countries also have passed through these same phases. But while the processes have consumed a leisurely five hundred years or so elsewhere, here they have been subjected to forced growth.

The tourist traveler is inclined to look upon the crumbling yet beautiful remains of the old missions, those venerable relics in a bustling modern land, as he looks upon the enduring remains of old Rome. Yet there are today many unconsidered New England farmhouses older than the oldest western mission, and there are men now living who witnessed the passing of Spanish California.

Though the existence of California had been known for centuries, and the dates of her first visitors are many hundreds of years old, nevertheless Spain attempted no actual occupation until she was forced to it by political necessity. Until that time she had little use for the country. After early investigations had exploded her dream of more treasure cities similar to those looted by Cortés and Pizarro, her interest promptly died.

But in the latter part of the eighteenth century Spain began to awake to the importance of action. Fortunately ready to her hand was a tried and tempered weapon. Just as the modern statesmen turn to commercial penetration, so Spain turned, as always, to religious occupation. She made use of the missionary spirit and she sent forth her expeditions ostensibly for the purpose of converting the heathen. The result was the so-called Sacred Expedition under the leadership of JunГѓ­pero Serra and Portolá. In the face of incredible hardships and discouragements, these devoted, if narrow and simple, men succeeded in establishing a string of missions from San Diego to Sonoma. The energy, self-sacrifice, and persistence of the members of this expedition furnish inspiring reading today and show clearly of what the Spanish character at its best is capable.

For the next thirty years after the founding of the first mission in 1769, the grasp of Spain on California was assured. Men who could do, suffer, and endure occupied the land. They made their mistakes in judgment and in methods, but the strong fiber of the pioneer was there. The original padres were almost without exception zealous, devoted to poverty, uplifted by a fanatic desire to further their cause. The original Spanish temporal leaders were in general able, energetic, courageous, and not afraid of work or fearful of disaster.

At the end of that period, however, things began to suffer a change. The time of pioneering came to an end, and the new age of material prosperity began. Evils of various sorts crept in. The pioneer priests were in some instances replaced by men who thought more of the flesh-pot than of the altar, and whose treatment of the Indians left very much to be desired....