The Fortunes of Oliver Horn 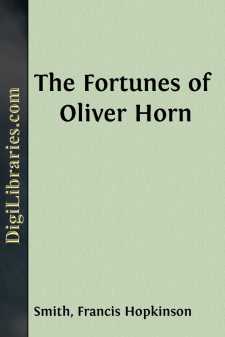 Within a day's journey of Kennedy Square lay another wide breathing-space, its winding paths worn smooth by countless hurrying feet.

Over its flat monotony straggled a line of gnarled willows, marking the wanderings of some guileless brook long since swallowed up and lost in the mazes of the great city like many another young life fresh from green fields and sunny hill-sides. This desert of weeds and sun-dried, yellow grass, this kraal for scraggly trees and broken benches, breasted the rush of the great city as a stone breasts a stream, dividing its current—one part swirling around and up Broadway to the hills and the other flowing eastward toward Harlem and the Sound. Around its four sides, fronting the four streets that hemmed it in, ran a massive iron railing, socketed in stone and made man-proof and dog-proof by four great iron gates. These gates were opened at dawn to let the restless in, and closed at night to keep the weary out.

Above these barriers of stone and iron no joyous magnolias lifted their creamy blossoms; no shy climbing roses played hide-and-seek, blushing scarlet when caught. Along its foot-worn paths no drowsy Moses ceased his droning call; no lovers walked forgetful of the world; no staid old gentlemen wandered idly, their noses in their books.

All day long on its rude straight-backed benches and over its thread-bare turf sprawled unkempt women with sick babies from the shanties; squalid, noisy children from the rookeries; beggars in rags, and now and then some hopeless wayfarer—who for the moment had given up his search for work or bread and who rested or slept until the tap of a constable's club brought him to consciousness and his feet.

At night, before the gates were closed—ten o'clock was the hour—there could always be found, under its dim lamps, some tired girl, sitting in the light for better protection while she rested, or some weary laborer on the way home from his long day's work, and always passing to and fro, swinging his staff, bullying the street-rats who were playing tag among the trees, and inspiring a wholesome awe among those hiding in the shadows, lounged some guardian of the peace awaiting the hour when he could drive the inmates to the sidewalk and shut the gates behind them with a bang.

Here on one of these same straight-backed wooden seats one September night—a night when the air was heavy with a blurred haze, through which the lamps peered as in a fog, and the dust lay thick upon the leaves—sat our Oliver.

Outside the square—all about the iron fence, and surging past the big equestrian statue, could be heard the roar and din of the great city—that maelstrom which now seemed ready to engulf him. No sound of merry laughter reached him, only rumbling of countless wheels, the slow thud of never-ending, crowded stages lumbering over the cobbles, the cries of the hucksters selling hot corn, and the ceaseless scrapings of a thousand feet.

He had sat here since the sun had gone down watching the crowds, wondering how they lived and how they had earned their freedom from such cares as were now oppressing him. His heart was heavy....