The Former Philippines thru Foreign Eyes 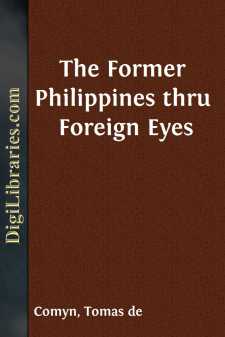 [Difference from European time.] When the clock strikes twelve in Madrid, [1] it is 8 hours, 18 minutes, and 41 seconds past eight in the evening at Manila; that is to say, the latter city lies 124° 40' 15'' to the east of the former (7 hours, 54 minutes, 35 seconds from Paris). Some time ago, however, while the new year was being celebrated in Madrid, it was only New Year's eve at Manila.

[Magellan's mistake in reckoning.] As Magellan, who discovered the Philippines in his memorable first circumnavigation of the globe, was following the sun in its apparent daily path around the world, every successive degree he compassed on his eastern course added four minutes to the length of his day; and, when he reached the Philippines, the difference amounted to sixteen hours. This, however, apparently escaped his notice, for Elcano, the captain of the only remaining vessel, was quite unaware, on his return to the longitude of his departure, why according to his ship's log-book, he was a day behind the time of the port which he had reached again by continuously sailing westward. [2] [3]

[Change to the Asian day.] The error remained also unheeded in the Philippines. It was still, over there the last day of the old year, while the rest of the world was commencing the new one; and this state of things continued till the close of 1844, when it was resolved, with the approval of the archbishop, to pass over New Year's eve for once altogether. [4] Since that time the Philippines are considered to lie no longer in the distant west, but in the far east, and are about eight hours in advance of their mother country. The proper field for their commerce, however, is what is to Europeans the far west; they were colonized thence, and for centuries, till 1811, they had almost no other communication with Europe but the indirect one by the annual voyage of the galleon between Manila and Acapulco. Now, however, when the eastern shores of the Pacific are at last beginning to teem with life, and, with unexampled speed, are pressing forward to grasp their stupendous future, the Philippines will no longer be able to remain in their past seclusion. No tropical Asiatic colony is so favorably situated for communication with the west coast of America, and it is only in a few matters that the Dutch Indies can compete with them for the favors of the Australian market. But, [Future in American and Australian trade.] on the other hand, they will have to abandon their traffic with China, whose principal emporium Manila originally was, as well as that with those westward-looking countries of Asia, Europe's far east, which lie nearest to the Atlantic ports. [5] [6]

[Commercially in the New World.] When the circumstances mentioned come to be realized, the Philippines, or, at any rate, the principal market for their commerce, will finally fall within the limits of the western hemisphere, to which indeed they were relegated by the illustrious Spanish geographers at Badajoz.

[The Pope's world-partitive.] The Bull issued by Alexander VI, [7] on May 4, 1493, which divided the earth into two hemispheres, decreed that all heathen lands discovered in the eastern half should belong to the Portuguese; in the western half to the Spaniards....