The Forester's Daughter A Romance of the Bear-Tooth Range 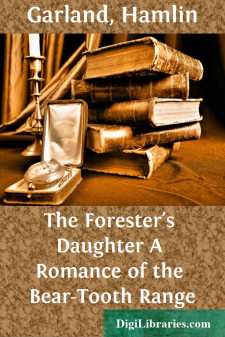 The stage line which ran from Williams to Bear Tooth (one of the most authentic then to be found in all the West) possessed at least one genuine Concord coach, so faded, so saddened, so cracked, and so splintered that its passengers entered it under protest, and alighted from it with thanksgiving, and yet it must have been built by honorable men, for in 190- it still made the run of one hundred and twenty miles twice each week without loss of wheel or even so much as moulting a scrap of paint.

And yet, whatever it may have been in its youth, it was in its age no longer a gay dash of color in the landscape. On the contrary, it fitted into the dust-brown and sage-green plain as defensively as a beetle in a dusty path. Nevertheless, it was an indispensable part of a very moving picture as it crept, creaking and groaning (or it may be it was the suffering passenger creaking and groaning), along the hillside.

After leaving the Grande River the road winds up a pretty high divide before plunging down into Ute Park, as they call all that region lying between the Continental Range on the east and the Bear Tooth plateau on the west. It was a big spread of land, and very far from an Eastern man’s conception of a park. From Dome Peak it seems a plain; but, in fact, when clouds shut off the high summits to the west, this “valley” becomes a veritable mountain land, a tumbled, lonely country, over which an occasional horseman crawls, a minute but persistent insect. It is, to be exact, a succession of ridges and ravines, sculptured (in some far-off, post-glacial time) by floods of water, covered now, rather sparsely, with pinons, cedars, and aspens, a dry, forbidding, but majestic landscape.

In late August the hills become iridescent, opaline with the translucent yellow of the aspen, the coral and crimson of the fire-weed, the blood-red of huckleberry beds, and the royal purple of the asters, while flowing round all, as solvent and neutral setting, lies the gray-green of the ever-present and ever-enduring sage-brush. On the loftier heights these colors are arranged in most intricate and cunning patterns, with nothing hard, nothing flaring in the prospect. All is harmonious and restful. It is, moreover, silent, silent as a dream world, and so flooded with light that the senses ache with the stress of it.

Through this gorgeous land of mist, of stillness, and of death, a few years ago a pale young man (seated beside the driver) rode one summer day in a voiceless rapture which made Bill McCoy weary.

“If you’d had as much of this as I have you’d talk of something else,” he growled, after a half dozen attempts at conversation. Bill wasn’t much to look at, but he was a good driver and the stranger respected him for it.

Eventually this simple-minded horseman became curious about the slim young fellow sitting beside him.

“What you doing out here, anyhow—fishing or just rebuilding a lung?”

“Well, this climate will just about put lungs into a coffee-can,” retorted Bill, with official loyalty to his country....