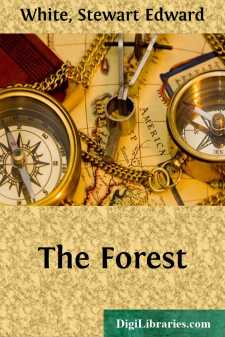 Some time in February, when the snow and sleet have shut out from the wearied mind even the memory of spring, the man of the woods generally receives his first inspiration. He may catch it from some companion's chance remark, a glance at the map, a vague recollection of a dim past conversation, or it may flash on him from the mere pronouncement of a name. The first faint thrill of discovery leaves him cool, but gradually, with the increasing enthusiasm of cogitation, the idea gains body, until finally it has grown to plan fit for discussion.

Of these many quickening potencies of inspiration, the mere name of a place seems to strike deepest at the heart of romance. Colour, mystery, the vastnesses of unexplored space are there, symbolized compactly for the aliment of imagination. It lures the fancy as a fly lures the trout. Mattágami, Peace River, Kánanaw, the House of the Touchwood Hills, Rupert's House, the Land of Little Sticks, Flying Post, Conjuror's House—how the syllables roll from the tongue, what pictures rise in instant response to their suggestion! The journey of a thousand miles seems not too great a price to pay for the sight of a place called the Hills of Silence, for acquaintance with the people who dwell there, perhaps for a glimpse of the saga-spirit that so named its environment. On the other hand, one would feel but little desire to visit Muggin's Corners, even though at their crossing one were assured of the deepest flavour of the Far North.

The first response to the red god's summons is almost invariably the production of a fly-book and the complete rearrangement of all its contents. The next is a resumption of practice with the little pistol. The third, and last, is pencil and paper, and lists of grub and duffel, and estimates of routes and expenses, and correspondence with men who spell queerly, bear down heavily with blunt pencils, and agree to be at Black Beaver Portage on a certain date. Now, though the February snow and sleet still shut him in, the spring has draw very near. He can feel the warmth of her breath rustling through his reviving memories.

There are said to be sixty-eight roads to heaven, of which but one is the true way, although here and there a by-path offers experimental variety to the restless and bold. The true way for the man in the woods to attain the elusive best of his wilderness experience is to go as light as possible, and the by-paths of departure from that principle lead only to the slightly increased carrying possibilities of open-water canoe trips, and permanent camps.

But these prove to be not very independent side paths, never diverging so far from the main road that one may dare hope to conceal from a vigilant eye that he is not going light.

To go light is to play the game fairly. The man in the woods matches himself against the forces of nature. In the towns he is warmed and fed and clothed so spontaneously and easily that after a time he perforce begins to doubt himself, to wonder whether his powers are not atrophied from disuse....