The Foreigner A Tale of Saskatchewan 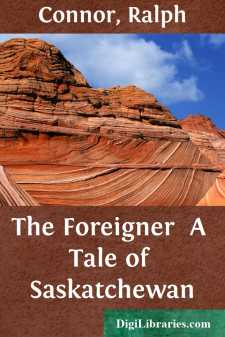 THE CITY ON THE PLAIN

Not far from the centre of the American Continent, midway between the oceans east and west, midway between the Gulf and the Arctic Sea, on the rim of a plain, snow swept in winter, flower decked in summer, but, whether in winter or in summer, beautiful in its sunlit glory, stands Winnipeg, the cosmopolitan capital of the last of the Anglo-Saxon Empires,—Winnipeg, City of the Plain, which from the eyes of the world cannot be hid. Miles away, secure in her sea-girt isle, is old London, port of all seas; miles away, breasting the beat of the Atlantic, sits New York, capital of the New World, and mart of the world, Old and New; far away to the west lie the mighty cities of the Orient, Peking and Hong Kong, Tokio and Yokohama; and fair across the highway of the world's commerce sits Winnipeg, Empress of the Prairies. Her Trans-Continental railways thrust themselves in every direction, —south into the American Republic, east to the ports of the Atlantic, west to the Pacific, and north to the Great Inland Sea.

To her gates and to her deep-soiled tributary prairies she draws from all lands peoples of all tribes and tongues, smitten with two great race passions, the lust for liberty, and the lust for land.

By hundreds and tens of hundreds they stream in and through this hospitable city, Saxon and Celt and Slav, each eager on his own quest, each paying his toll to the new land as he comes and goes, for good or for ill, but whether more for good than for ill only God knows.

A hundred years ago, where now stands the thronging city, stood the lonely trading-post of The Honourable, The Hudson's Bay Company. To this post in their birch bark canoes came the half-breed trapper and the Indian hunter, with their priceless bales of furs to be bartered for blankets and beads, for pemmican and bacon, for powder and ball, and for the thousand and one articles of commerce that piled the store shelves from cellar to roof.

Fifty years ago, about the lonely post a little settlement had gathered—a band of sturdy Scots. Those dour and doughty pioneers of peoples had planted on the Red River their homes upon their little "strip" farms—a rampart of civilization against the wide, wild prairie, the home of the buffalo, and camp ground of the hunters of the plain.

Twenty-five years ago, in the early eighties, a little city had fairly dug its roots into the black soil, refusing to be swept away by that cyclone of financial frenzy known over the Continent as the "boom of '81," and holding on with abundant courage and invincible hope, had gathered to itself what of strength it could, until by 1884 it had come to assume an appearance of enduring solidity. Hitherto accessible from the world by the river and the railroad from the south, in this year the city began to cast eager eyes eastward, and to listen for the rumble of the first trans-continental train, which was to bind the Provinces of Canada into a Dominion, and make Winnipeg into one of the cities of the world. Trade by the river died, but meantime the railway from the south kept pouring in a steady stream of immigration, which distributed itself according to its character and in obedience to the laws of affinity, the French Canadian finding a congenial home across the Red River in old St....