The Fool Errant Being the Memoirs of Francis-Anthony Strelley, Esq., Citizen of Lucca 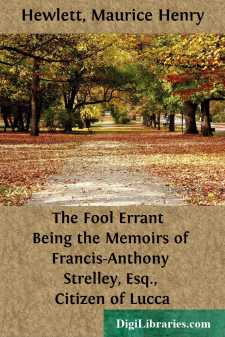 The top-heavy, four-horsed, yellow old coach from Vicenza, which arrived at Padua every night of the year, brought with it in particular on the night of October 13, 1721, a tall, personable young man, an Englishman, in a dark blue cloak, who swang briskly down from the coupe and asked in stilted Italian for "La sapienza del Signer Dottor' Lanfranchi." From out of a cloud of steam—for the weather was wet and the speaker violently hot—a husky voice replied, "Eccomi—eccomi, a servirla." The young man took off his hat and bowed.

"Have I the honour to salute so much learning?" he asked courteously."Let me present myself to my preceptor as Mr. Francis Strelley ofUpcote."

"His servant," said the voice from the cloud, "and servant of his illustrious father. Don Francis, be accommodated; let your mind be at ease. Your baggage? These fellows are here for it. Your valise? I carry it. Your hand? I take it. Follow me."

These words were accompanied by action of the most swift and singular kind. Mr. Strelley saw two porters scramble after his portmanteaux, had his valise reft from his hand, and that hand firmly grasped before he could frame his reply. The vehemence of this large perspiring sage caused the struggle between pride and civility to be short; such faint protests as he had at command passed unheeded in the bustle and could not be seen in the dark.

Vehement, indeed, in all that he did was Dr. Porfirio Lanfranchi, Professor of Civil Law: it was astonishing that a bulk so large and loosely packed could be propelled by the human will at so headlong a speed. Yet, spurred by that impetus alone, he pounded and splashed through the puddled, half-lit street of Padua at such a rate that Mr. Strelley, though longer in the leg, fully of his height, and one quarter his weight, found himself trotting beside his conductor like any schoolboy. The position was humiliating, but it did not seem possible to escape it. The doctor took everything for granted; and besides, he so groaned and grunted at his labours, his goaded flesh protested so loudly, the pitfalls were so many, and the pace so severe, that nothing in the world seemed of moment beyond preserving foothold. Along the winding way—between the half-discerned arcades, palace gateways, black entries, church portals—down the very middle of the street flew master and pupil without word spoken. They reached the Pra, skirted its right- hand boundary for some hundreds of yards, and came to the door of a tall, narrow, white house. Upon this door the doctor kicked furiously until it was opened; then, with a malediction upon the oaf who snored behind it, up he blundered, three stairs at a time, Strelley after him whether or no; and stayed not in his rush towards the stars until he had reached the fourth-floor landing, where again he kicked at a door; and then, releasing his victim's hand, took off hat and wig together and mopped his dripping pate, as he murmured, "Chaste Madonna, what a ramble! What a stroll for the evening, powerful Mother of us all!" Such a stroll had never yet been taken by Mr....