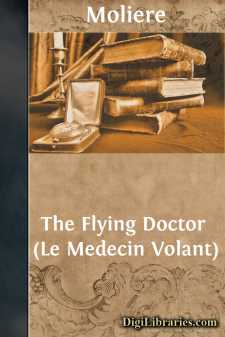 Val. Well, Sabine, what do you advise me to do?

Sab. I have really much to tell you. My uncle is bent upon marrying my cousin to Villebrequin, and things have gone so far, that I believe the wedding would have taken place to-day if you were not loved by her. However, as my cousin told me the secret of all the love she feels for you, and as we were almost driven to desperation through the avarice of our niggardly uncle, we thought of a capital device to prevent the marriage: at the present moment my cousin affects to be ill, and the foolish old man, who is easily deceived, has just sent me to fetch a doctor. Could you not find one, some friend of yours, who would be on our side, and order the invalid to go into the country for a change of air? The old man will be sure to send my cousin to live in the pavilion, which is at the bottom of our garden. In that way you will be able to see her, unknown to our uncle, and marry her; then let him and Villebrequin curse as much as they please.

Val. But what means have I of finding so suddenly the doctor I want, and who would risk so much to serve me? I tell you frankly I know of none.

Sab. Now I think of it, why don't you have your servant dressed up as a doctor? There is no one more easy to dupe than the old fellow.

Val. But Sganarelle is a blockhead who will spoil everything. However, as we have nobody else, we must make use of him. But where shall we find him?——Ah! here he is in the very nick of time. (Exit Sabine.)

Val. Ah! my poor Sganarelle, how glad I am to see you! I want your help in a most important business, but as I do not know what you can do …

Sgan. What I can do, sir? Only make use of me in your more important business, in things of consequence: for instance, send me to see what time it is by the clock; send me to the market to ask the price of butter; send me to water a horse; it is then that you will be able to judge of my talents.

Val. I ask for none of these things, I want you to play the part of a doctor.

Sgan. I, a doctor, sir! I am ready to do all you please, but as for being a doctor, I say no; I am your servant, I will be nothing of the kind. I ask you how I should set about it; goodness me, sir, you are only laughing at me.

Val. If you will try, I will give you ten pistoles.

Sgan. Ah! ten pistoles; well, I won't say I am no doctor, for you see, sir, I am not so scrupulous as to tell you the whole truth. But supposing I am a doctor, where shall I go?

Val. To the old man Gorgibus, to see his daughter who is ill; but you are a blockhead who, instead of doing what we want, might …

Sgan. Ah! sir, don't be anxious; I'll answer for it that I can kill anybody as well as any doctor in the town. The proverb usually is, "after death comes the doctor," but you will see that if I have anything to do with it, it will be, "after the doctor comes death!" But now, while I think of it, it must be difficult to play the doctor; and if I do nothing right…...?