The Flourishing of Romance and the Rise of Allegory (Periods of European Literature, vol. II) 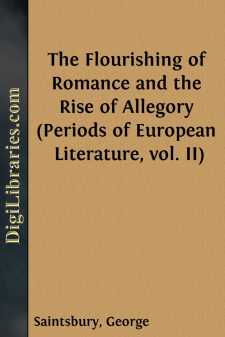 As this volume, although not the first in chronological order, is likely to be the first to appear in the Series of which it forms part, and of which the author has the honour to be editor, it may be well to say a few words here as to the scheme of this Series generally. When that scheme was first sketched, it was necessarily objected that it would be difficult, if not impossible, to obtain contributors who could boast intimate and equal knowledge of all the branches of European literature at any given time. To meet this by a simple denial was, of course, not to be thought of. Even universal linguists, though not unknown, are not very common; and universal linguists have not usually been good critics of any, much less of all, literature. But it could be answered that if the main principle of the scheme was sound—that is to say, if it was really desirable not to supplant but to supplement the histories of separate literatures, such as now exist in great numbers, by something like a new "Hallam," which should take account of all the simultaneous and contemporary developments and their interaction—some sacrifice in point of specialist knowledge of individual literatures not only must be made, but might be made with little damage. And it could be further urged that this sacrifice might be reduced to a minimum by selecting in each case writers thoroughly acquainted with the literature which happened to be of greatest prominence in the special period, provided always that their general literary knowledge and critical habits were such as to render them capable of giving a fit account of the rest.

In the carrying out of such a scheme occasional deficiencies of specialist dealing, or even of specialist knowledge, must be held to be compensated by range of handling and width of view. And though it is in all such cases hopeless to appease what has been called "the rage of the specialist" himself—though a Mezzofanti doubled with a Sainte-Beuve could never, in any general history of European literature, hope to satisfy the special devotees of Roumansch or of Platt-Deutsch, not to mention those of the greater languages—yet there may, I hope, be a sufficient public who, recognising the advantage of the end, will make a fair allowance for necessary shortcomings in the means.

As, however, it is quite certain that there will be some critics, if not some readers, who will not make this allowance, it seemed only just that the Editor should bear the brunt in this new Passage Perilous. I shall state very frankly the qualifications which I think I may advance in regard to this volume. I believe I have read most of the French and English literature proper of the period that is in print, and much, if not most, of the German. I know somewhat less of Icelandic and Provençal; less still of Spanish and Italian as regards this period, but something also of them: Welsh and Irish I know only in translations. Now it so happens that—for the period—French is, more than at any other time, the capital literature of Europe....