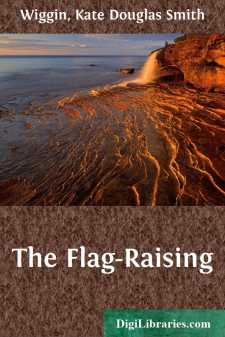 A DIFFERENCE IN HEARTS

"I DON' know as I cal'lated to be the makin' of any child," Miranda had said as she folded Aurelia's letter and laid it in the light-stand drawer. "I s'posed of course Aurelia would send us the one we asked for, but it's just like her to palm off that wild young one on somebody else."

"You remember we said that Rebecca, or even Jenny might come, in case Hannah could n't," interposed Jane.

"I know we did, but we hadn't any notion it would turn out that way," grumbled Miranda.

"She was a mite of a thing when we saw her three years ago," ventured Jane; "she's had time to improve."

"And time to grow worse!"

"Won't it be kind of a privilege to put her on the right track?" asked Jane timidly.

"I don' know about the privilege part; it'll be considerable work, I guess. If her mother hasn't got her on the right track by now, she won't take to it herself all of a sudden."

This depressed and depressing frame of mind had lasted until the eventful day dawned on which Rebecca was to arrive.

"If she makes as much work after she comes as she has before, we might as well give up hope of ever gettin' any rest," sighed Miranda as she hung the dish towels on the barberry bushes at the side door.

"But we should have had to clean house, Rebecca or no Rebecca," urged Jane; "and I can't see why you've scrubbed and washed and baked as you have for that one child, nor why you've about bought out Watson's stock of dry goods."

"I know Aurelia if you don't," responded Miranda. "I've seen her house, and I've seen that batch o' children, wearin' one another's clothes and never carin' whether they had 'em on right side out or not; I know what they've had to live and dress on, and so do you. That child will like as not come here with a bundle o' things borrowed from the rest o' the family. She'll have Hannah's shoes and John's undershirts and Mark's socks most likely. I suppose she never had a thimble on her finger in her life, but she'll know the feelin' o' one before she's been here many days. I've bought a piece of unbleached muslin and a piece o' brown gingham for her to make up; that'll keep her busy. Of course she won't pick up anything after herself; she probably never saw a duster, and she'll be as hard to train into our ways as if she was a heathen."

"She'll make a dif'rence," acknowledged Jane, "but she may turn out more biddable than we think."

"She'll mind when she's spoken to, biddable or not," remarked Miranda with a shake of the last towel.

Miranda Sawyer had a heart, of course, but she had never used it for any other purpose than the pumping and circulating of blood. She was just, conscientious, economical, industrious; a regular attendant at church and Sunday-school, and a member of the State Missionary and Bible societies, but in the presence of all these chilly virtues you longed for one warm little fault, or lacking that, one likable failing, something to make you sure that she was thoroughly alive. She had never had any education other than that of the neighborhood district school, for her desires and ambitions had all pointed to the management of the house, the farm, and the dairy....