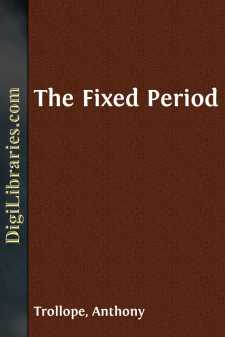 It may be doubted whether a brighter, more prosperous, and specially a more orderly colony than Britannula was ever settled by British colonists. But it had its period of separation from the mother country, though never of rebellion,—like its elder sister New Zealand. Indeed, in that respect it simply followed the lead given her by the Australias, which, when they set up for themselves, did so with the full co-operation of England. There was, no doubt, a special cause with us which did not exist in Australia, and which was only, in part, understood by the British Government when we Britannulists were allowed to stand by ourselves. The great doctrine of a "Fixed Period" was received by them at first with ridicule, and then with dismay; but it was undoubtedly the strong faith which we of Britannula had in that doctrine which induced our separation. Nothing could have been more successful than our efforts to live alone during the thirty years that we remained our own masters. We repudiated no debt,—as have done some of our neighbours; and no attempts have been made towards communism,—as has been the case with others. We have been laborious, contented, and prosperous; and if we have been reabsorbed by the mother country, in accordance with what I cannot but call the pusillanimous conduct of certain of our elder Britannulists, it has not been from any failure on the part of the island, but from the opposition with which the Fixed Period has been regarded.

I think I must begin my story by explaining in moderate language a few of the manifest advantages which would attend the adoption of the Fixed Period in all countries. As far as the law went it was adopted in Britannula. Its adoption was the first thing discussed by our young Assembly, when we found ourselves alone; and though there were disputes on the subject, in none of them was opposition made to the system. I myself, at the age of thirty, had been elected Speaker of that Parliament. But I was, nevertheless, able to discuss the merits of the bills in committee, and I did so with some enthusiasm. Thirty years have passed since, and my "period" is drawing nigh. But I am still as energetic as ever, and as assured that the doctrine will ultimately prevail over the face of the civilised world, though I will acknowledge that men are not as yet ripe for it.

The Fixed Period has been so far discussed as to make it almost unnecessary for me to explain its tenets, though its advantages may require a few words of argument in a world that is at present dead to its charms. It consists altogether of the abolition of the miseries, weakness, and fainéant imbecility of old age, by the prearranged ceasing to live of those who would otherwise become old. Need I explain to the inhabitants of England, for whom I chiefly write, how extreme are those sufferings, and how great the costliness of that old age which is unable in any degree to supply its own wants? Such old age should not, we Britannulists maintain, be allowed to be....