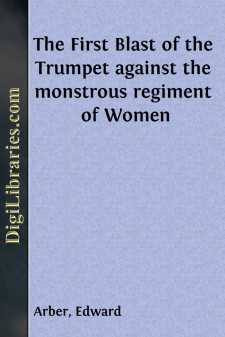 At the time this tract was written the destinies, immediate and prospective, of the Protestant faith seemed to lay wholly in the laps of five women, viz:--

MARY TUDOR, Queen of England, having for her heir apparent the Princess ELIZABETH.

Of these, the last--also of least account at this moment, being in confinement--was the only hope of the Reformers. The other four, largely directing the affairs of three kingdoms, were steadfastly hostile to the new faith. Truly, the odds were heavy against it. Who could have anticipated that within three years of the writing of this book both MARY TUDOR and MARY DE LORRAINE would have passed away; that KNOX himself would have been in Scotland carrying on the Reformation; and that ELIZABETH would have commenced her marvellous reign. So vast a change in the political world was quite beyond all reasonable foresight.

Meanwhile there was only present to the vision and heart of the Reformer as he gazed seaward, from Dieppe, but the unceasing blaze of, the martyr fires spreading from Smithfield all over England. Month after month this horrid work was deliberately carried on and was increasing in intensity.

We se our countrie set furthe for a pray to foreine nations, we heare the blood of our brethren, the membres of Christ Iesus most cruellie to be shed, and the monstruous empire of a cruell women (the secrete counsel of God excepted) we knowe to be the onlie occasion of all the miseries: and yet with silence we passe the time as thogh the mater did nothinge appertein to vs. p. 3.

The vigour of the persecution had struck all heart out of the Protestants. Was this to go on for ever? Heart-wrung at the ruthless slaughter--as we, in our day, have been by the horrors of the Indian mutiny or of the Bulgarian atrocities---the Reformer sought to know the occasion of all these calamities. At that moment, he found it in the Empire of Woman. Afterwards he referred much of this book to the time in which it was written [pp. 58 and 61]. Shall we say that his heart compelled his head to this argument, that his indignation entangled his understanding on this subject? Just as MILTON was led to the discussion of the conditions of divorce, through his desertion by his wife MARY POWELL; so the fiery martyrdoms of England led KNOX to denounce the female sex in the person of her whom we still call "Bloody MARY" that was the occasion of them all.

If in the happiest moment of his happiest dream, JOHN KNOX could have foreseen our good and revered Queen VICTORIA reigning in the hearts of the millions of her subjects, and ruling an Empire wider by far than those of Spain and Portugal in his day; if he could have seen England and Scotland ONE COUNTRY, bearing the name which, as almost of prophecy, he has foreshadowed for them in this tract, "the Ile of greate Britanny;" if he could have beheld that one country as it now abides in its strength and its wealth, the most powerful of European states; if he could have realized free Italy with Rome, the Popes without temporal power, and modern civilisation more than a match for Papal intrigues; if he could have known that the gospel for which he lived had regenerated the social life of Great Britain, that it was tha confessed basis of our political action and the perennial spring of our Christian activities, so that not merely in physical strength, but in moral, force and mental enlightenment we are in the van of the nations of the world: if the great Scotch Reformer had but had a glimpse of this present reality, this tract would never have been written, and he would willingly have sung the paean of aged SIMEON and passed out of this life....