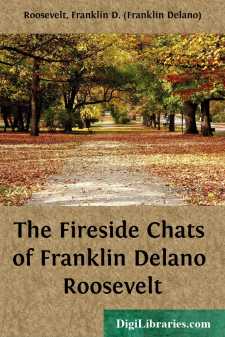 I want to talk for a few minutes with the people of the United States about banking—with the comparatively few who understand the mechanics of banking but more particularly with the overwhelming majority who use banks for the making of deposits and the drawing of checks. I want to tell you what has been done in the last few days, why it was done, and what the next steps are going to be. I recognize that the many proclamations from state capitols and from Washington, the legislation, the treasury regulations, etc., couched for the most part in banking and legal terms should be explained for the benefit of the average citizen. I owe this in particular because of the fortitude and good temper with which everybody has accepted the inconvenience and hardships of the banking holiday. I know that when you understand what we in Washington have been about I shall continue to have your cooperation as fully as I have had your sympathy and help during the past week.

First of all let me state the simple fact that when you deposit money in a bank the bank does not put the money into a safe deposit vault. It invests your money in many different forms of credit— bonds, commercial paper, mortgages and many other kinds of loans. In other words, the bank puts your money to work to keep the wheels of industry and of agriculture turning around. A comparatively small part of the money you put into the bank is kept in currency— an amount which in normal times is wholly sufficient to cover the cash needs of the average citizen. In other words, the total amount of all the currency in the country is only a small fraction of the total deposits in all of the banks.

What, then, happened during the last few days of February and the first few days of March? Because of undermined confidence on the part of the public, there was a general rush by a large portion of our population to turn bank deposits into currency or gold—a rush so great that the soundest banks could not get enough currency to meet the demand. The reason for this was that on the spur of the moment it was, of course, impossible to sell perfectly sound assets of a bank and convert them into cash except at panic prices far below their real value.

By the afternoon of March 3d scarcely a bank in the country was open to do business. Proclamations temporarily closing them in whole or in part had been issued by the governors in almost all the states.

It was then that I issued the proclamation providing for the nation-wide bank holiday, and this was the first step in the government's reconstruction of our financial and economic fabric.

The second step was the legislation promptly and patriotically passed by the Congress confirming my proclamation and broadening my powers so that it became possible in view of the requirement of time to extend the holiday and lift the ban of that holiday gradually. This law also gave authority to develop a program of rehabilitation of our banking facilities. I want to tell our citizens in every part of the nation that the national Congress— Republicans and Democrats alike—showed by this action a devotion to public welfare and a realization of the emergency and the necessity for speed that it is difficult to match in our history....