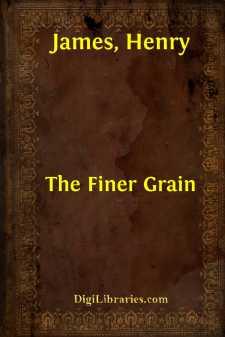 HE thought he had already, poor John Berridge, tasted in their fulness the sweets of success; but nothing yet had been more charming to him than when the young Lord, as he irresistibly and, for greater certitude, quite correctly figured him, fairly sought out, in Paris, the new literary star that had begun to hang, with a fresh red light, over the vast, even though rather confused, Anglo-Saxon horizon; positively approaching that celebrity with a shy and artless appeal. The young Lord invoked on this occasion the celebrity's prized judgment of a special literary case; and Berridge could take the whole manner of it for one of the "quaintest" little acts displayed to his amused eyes, up to now, on the stage of European society—albeit these eyes were quite aware, in general, of missing everywhere no more of the human scene than possible, and of having of late been particularly awake to the large extensions of it spread before him (since so he could but fondly read his fate) under the omen of his prodigious "hit." It was because of his hit that he was having rare opportunities—of which he was so honestly and humbly proposing, as he would have said, to make the most: it was because every one in the world (so far had the thing gone) was reading "The Heart of Gold" as just a slightly too fat volume, or sitting out the same as just a fifth-act too long play, that he found himself floated on a tide he would scarce have dared to show his favourite hero sustained by, found a hundred agreeable and interesting things happen to him which were all, one way or another, affluents of the golden stream.

The great renewed resonance—renewed by the incredible luck of the play—was always in his ears without so much as a conscious turn of his head to listen; so that the queer world of his fame was not the mere usual field of the Anglo-Saxon boom, but positively the bottom of the whole theatric sea, unplumbed source of the wave that had borne him in the course of a year or two over German, French, Italian, Russian, Scandinavian foot-lights. Paris itself really appeared for the hour the centre of his cyclone, with reports and "returns," to say nothing of agents and emissaries, converging from the minor capitals; though his impatience was scarce the less keen to get back to London, where his work had had no such critical excoriation to survive, no such lesson of anguish to learn, as it had received at the hand of supreme authority, of that French authority which was in such a matter the only one to be artistically reckoned with. If his spirit indeed had had to reckon with it his fourth act practically hadn't: it continued to make him blush every night for the public more even than the inimitable feuilleton had made him blush for himself.

This had figured, however, after all, the one bad drop in his cup; so that, for the rest, his high-water mark might well have been, that evening at Gloriani's studio, the approach of his odd and charming applicant, vaguely introduced at the latter's very own request by their hostess, who, with an honest, helpless, genial gesture, washed her fat begemmed hands of the name and identity of either, but left the fresh, fair, ever so habitually assured, yet ever so easily awkward Englishman with his plea to put forth. There was that in this pleasant personage which could still make Berridge wonder what conception of profit from him might have, all incalculably, taken form in such a head—these being truly the last intrenchments of our hero's modesty. He wondered, the splendid young man, he wondered awfully, he wondered (it was unmistakable) quite nervously, he wondered, to John's ardent and acute imagination, quite beautifully, if the author of "The Heart of Gold" would mind just looking at a book by a friend of his, a great friend, which he himself believed rather clever, and had in fact found very charming, but as to which—if it really wouldn't bore Mr. Berridge—he should so like the verdict of some one who knew. His friend was awfully ambitious, and he thought there was something in it—with all of which might he send the book to any address?

Berridge thought of many things while the young Lord thus charged upon him, and it was odd that no one of them was any question of the possible worth of the offered achievement—which, for that matter, was certain to be of the quality of all the books, to say nothing of the plays, and the projects for plays, with which, for some time past, he had seen his daily post-bag distended. He had made out, on looking at these things, no difference at all from one to the other. Here, however, was something more—something that made his fellow-guest's overture independently interesting and, as he might imagine, important....