The Fight For The Republic in China 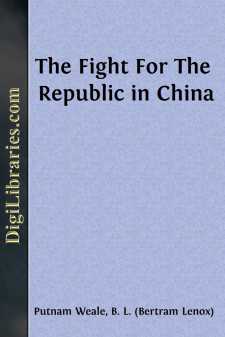 The revolution which broke out in China on the 10th October, 1911, and which was completed with the abdication of the Manchu Dynasty on the 12th February, 1912, though acclaimed as highly successful, was in its practical aspects something very different. With the proclamation of the Republic, the fiction of autocratic rule had truly enough vanished; yet the tradition survived and with it sufficient of the essential machinery of Imperialism to defeat the nominal victors until the death of Yuan Shih-kai.

The movement to expel the Manchus, who had seized the Dragon Throne in 1644 from the expiring Ming Dynasty, was an old one. Historians are silent on the subject of the various secret plots which were always being hatched to achieve that end, their silence being due to a lack of proper records and to the difficulty of establishing the simple truth in a country where rumour reigns supreme. But there is little doubt that the famous Ko-lao-hui, a Secret Society with its headquarters in the remote province of Szechuan, owed its origin to the last of the Ming adherents, who after waging a desperate guerilla warfare from the date of their expulsion from Peking, finally fell to the low level of inciting assassinations and general unrest in the vain hope that they might some day regain their heritage. At least, we know one thing definitely: that the attempt on the life of the Emperor Chia Ching in the Peking streets at the beginning of the Nineteenth Century was a Secret Society plot and brought to an abrupt end the pleasant habit of travelling among their subjects which the great Manchu Emperors K'ang-hsi and Ch'ien Lung had inaugurated and always pursued and which had so largely encouraged the growth of personal loyalty to a foreign House.

From that day onwards for over a century no Emperor ventured out from behind the frowning Walls of the Forbidden City, save for brief annual ceremonies, such as the Worship of Heaven on the occasion of the Winter Solstice, and during the two "flights"—first in 1860 when Peking was occupied by an Anglo-French expedition and the Court incontinently sought sanctuary in the mountain Palaces of Jehol; and, again, in 1900, when with the pricking of the Boxer bubble and the arrival of the International relief armies, the Imperial Household was forced along the stony road to far-off Hsianfu.

The effect of this immurement was soon visible; the Manchu rule, which was emphatically a rule of the sword, was rapidly so weakened that the emperors became no more than rois fainéants at the mercy of their minister. The history of the Nineteenth Century is thus logically enough the history of successive collapses. Not only did overseas foreigners openly thunder at the gateways of the empire and force an ingress, but native rebellions were constant and common. Leaving minor disturbances out of account, there were during this period two huge Mahommedan rebellions, besides the cataclysmic Taiping rising which lasted ten years and is supposed to have destroyed the unbelievable total of one hundred million persons. The empire, torn by internecine warfare, surrendered many of its essential prerogatives to foreigners, and by accepting the principle of extraterritoriality prepared the road to ultimate collapse.

How in such circumstances was it possible to keep alive absolutism? The answer is so curious that we must be explicit and exhaustive.

The simple truth is that save during the period of vigour immediately following each foreign conquest (such as the Mongol conquest in the Thirteenth Century and the Manchu in the Seventeenth) not only has there never been any absolutism properly so-called in China, but that apart from the most meagre and inefficient tax-collecting and some rough-and-ready policing in and around the cities there has never been any true governing at all save what the people did for themselves or what they demanded of the officials as a protection against one another. Any one who doubts these statements has no inkling of those facts which are the crown as well as the foundation of the Chinese group-system, and which must be patiently studied in the village-life of the country to be fitly appreciated. To be quite frank, absolutism is a myth coming down from the days of Kublai Khan when he so proudly built his Khanbaligh (the Cambaluc of Marco Polo and the forebear of modern Peking) and filled it with his troops who so soon vanished like the snows of winter....