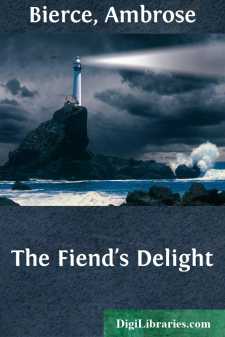 It was midnight-a black, wet, midnight-in a great city by the sea. The church clocks were booming the hour, in tones half-smothered by the marching rain, when an officer of the watch saw a female figure glide past him like a ghost in the gloom, and make directly toward a wharf. The officer felt that some dreadful tragedy was about to be enacted, and started in pursuit. Through the sleeping city sped those two dark figures like shadows athwart a tomb. Out along the deserted wharf to its farther end fled the mysterious fugitive, the guardian of the night vainly endeavouring to overtake, and calling to her to stay. Soon she stood upon the extreme end of the pier, in the scourging rain which lashed her fragile figure and blinded her eyes with other tears than those of grief. The night wind tossed her tresses wildly in air, and beneath her bare feet the writhing billows struggled blackly upward for their prey. At this fearful moment the panting officer stumbled and fell! He was badly bruised; he felt angry and misanthropic. Instead of rising to his feet, he sat doggedly up and began chafing his abraded shin. The desperate woman raised her white arms heavenward for the final plunge, and the voice of the gale seemed like the dread roaring of the waters in her ears, as down, down, she went—in imagination—to a black death among the spectral piles. She backed a few paces to secure an impetus, cast a last look upon the stony officer, with a wild shriek sprang to the awful verge and came near losing her balance. Recovering herself with an effort, she turned her face again to the officer, who was clawing about for his missing club. Having secured it, he started to leave.

In a cosy, vine-embowered cottage near the sounding sea, lives and suffers a blighted female. Nothing being known of her past history, she is treated by her neighbours with marked respect. She never speaks of the past, but it has been remarked that whenever the stalwart form of a certain policeman passes her door, her clean, delicate face assumes an expression which can only be described as frozen profanity. The Strong Young Man of Colusa.

Professor Cramer conducted a side-show in the wake of a horse-opera, and the same sojourned at Colusa. Enters unto the side show a powerful young man of the Colusa sort, and would see his money's worth. Blandly and with conscious pride the Professor directs the young man's attention to his fine collection of living snakes. Lithely the blacksnake uncoils in his sight. Voluminously the bloated boa convolves before him. All horrent the cobra exalts his hooded head, and the spanning jaws fly open. Quivers and chitters the tail of the cheerful rattlesnake; silently slips out the forked tongue, and is as silently absorbed. The fangless adder warps up the leg of the Professor, lays clammy coils about his neck, and pokes a flattened head curiously into his open mouth. The young man of Colusa is interested; his feelings transcend expression....