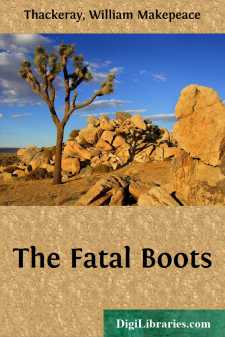 JANUARY.—THE BIRTH OF THE YEAR.

Some poet has observed, that if any man would write down what has really happened to him in this mortal life, he would be sure to make a good book, though he never had met with a single adventure from his birth to his burial. How much more, then, must I, who HAVE had adventures, most singular, pathetic, and unparalleled, be able to compile an instructive and entertaining volume for the use of the public.

I don't mean to say that I have killed lions, or seen the wonders of travel in the deserts of Arabia or Prussia; or that I have been a very fashionable character, living with dukes and peeresses, and writing my recollections of them, as the way now is. I never left this my native isle, nor spoke to a lord (except an Irish one, who had rooms in our house, and forgot to pay three weeks' lodging and extras); but, as our immortal bard observes, I have in the course of my existence been so eaten up by the slugs and harrows of outrageous fortune, and have been the object of such continual and extraordinary ill-luck, that I believe it would melt the heart of a milestone to read of it—that is, if a milestone had a heart of anything but stone.

Twelve of my adventures, suitable for meditation and perusal during the twelve months of the year, have been arranged by me for this work. They contain a part of the history of a great, and, confidently I may say, a GOOD man. I was not a spendthrift like other men. I never wronged any man of a shilling, though I am as sharp a fellow at a bargain as any in Europe. I never injured a fellow-creature; on the contrary, on several occasions, when injured myself, have shown the most wonderful forbearance. I come of a tolerably good family; and yet, born to wealth—of an inoffensive disposition, careful of the money that I had, and eager to get more,—I have been going down hill ever since my journey of life began, and have been pursued by a complication of misfortunes such as surely never happened to any man but the unhappy Bob Stubbs.

Bob Stubbs is my name; and I haven't got a shilling: I have borne the commission of lieutenant in the service of King George, and am NOW—but never mind what I am now, for the public will know in a few pages more. My father was of the Suffolk Stubbses—a well-to-do gentleman of Bungay. My grandfather had been a respected attorney in that town, and left my papa a pretty little fortune. I was thus the inheritor of competence, and ought to be at this moment a gentleman.

My misfortunes may be said to have commenced about a year before my birth, when my papa, a young fellow pretending to study the law in London, fell madly in love with Miss Smith, the daughter of a tradesman, who did not give her a sixpence, and afterwards became bankrupt. My papa married this Miss Smith, and carried her off to the country, where I was born, in an evil hour for me.

Were I to attempt to describe my early years, you would laugh at me as an impostor; but the following letter from mamma to a friend, after her marriage, will pretty well show you what a poor foolish creature she was; and what a reckless extravagant fellow was my other unfortunate parent:—