The Fat of the Land The Story of an American Farm 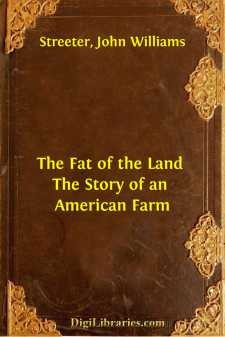 My sixtieth birthday is a thing of yesterday, and I have, therefore, more than half descended the western slope. I have no quarrel with life or with time, for both have been polite to me; and I wish to give an account of the past seven years to prove the politeness of life, and to show how time has made amends to me for the forced resignation of my professional ambitions. For twenty-five years, up to 1895, I practised medicine and surgery in a large city. I loved my profession beyond the love of most men, and it loved me; at least, it gave me all that a reasonable man could desire in the way of honors and emoluments. The thought that I should ever drop out of this attractive, satisfying life, never seriously occurred to me, though I was conscious of a strong and persistent force that urged me toward the soil. By choice and by training I was a physician, and I gloried in my work; but by instinct I was, am, and always shall be, a farmer. All my life I have had visions of farms with flocks and herds, but I did not expect to realize my visions until I came on earth a second time.

I would never have given up my profession voluntarily; but when it gave me up, I had to accept the dismissal, surrender my ambitions, and fall back upon my primary instinct for diversion and happiness. The dismissal came without warning, like the fall of a tree when no wind shakes the forest, but it was imperative and peremptory. The doctors (and they were among the best in the land) said, "No more of this kind of work for years," and I had to accept their verdict, though I knew that "for years" meant forever.

My disappointment lasted longer than the acute attack; but, thanks to the cheerful spirit of my wife, by early summer of that year I was able to face the situation with courage that grew as strength increased. Fortunately we were well to do, and the loss of professional income was not a serious matter. We were not rich as wealth is counted nowadays; but we were more than comfortable for ourselves and our children, though I should never earn another dollar. This is not the common state of the physician, who gives more and gets less than most other men; it was simply a happy combination of circumstances. Polly was a small heiress when we married; I had some money from my maternal grandfather; our income was larger than our necessities, and our investments had been fortunate. Fate had set no wolf to howl at our door.

In June we decided to take to the woods, or rather to the country, to see what it had in store for us. The more we thought of it, the better I liked the plan, and Polly was no less happy over it. We talked of it morning, noon, and night, and my half-smothered instinct grew by what it fed on. Countless schemes at length resolved themselves into a factory farm, which should be a source of pleasure as well as of income. It was of all sizes, shapes, industries, and limits of expenditure, as the hours passed and enthusiasm waxed or waned. I finally compromised on from two hundred to three hundred acres of land, with a total expenditure of not more than $60,000 for the building of my factory....