The False Chevalier or, The Lifeguard of Marie Antoinette 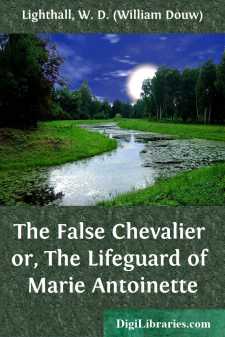 The son of the merchant Lecour was a handsome youth, and there was great joy in the family at his coming home to St. Elphège. For he was going to France on the morrow; it was with that object that his father had sent to town for him—the little walled town of Montreal.

It was evening, early in May, of the year 1786. According to an old custom of the French-Canadians, the merchant, surrounded by his family, was bestowing upon his son the paternal blessing. It was a touching sight—the patriarchal ceremony of benediction.

The father was a fine type of the peasant. His features might, in the strong chiaroscuro of the candle-light, have stood as model for some church fresco of a St. Peter. His dress was of grey country homespun, cut in a long coat, and girded by a many-coloured arrow-pattern sash, and on his feet he wore a pair of well-worn beef-skin mocassins.

The son was some twenty years of age, and his mien and dress told of the better social advantages of the town. Indeed, his costume, though somewhat worn, had marks of good fashion.

His younger sister (for he had two, of whom one was absent), and his mother, a lively, black-eyed woman, who dressed and bore herself ambitiously for her station, gazed on him in fond pride as he knelt.

"My son," the merchant said reverently, his hands outstretched over his boy, "the Almighty keep and guard thee; may the blessing of thy father and thy mother follow thee wherever thou goest."

He rose and stood before his parent with bent head.

The old man exhorted him gravely on the dangers before him—on the ruffians and lures of Paris, and the excitements of youth. He warned him to attend to his religious duties, and to do credit to his family and their condition in life by respectful and irreproachable conduct. "Never forget," he concluded, in words which the young man remembered in after years, "that the Eternal Justice follows us everywhere, and calls us to exact account, either on earth or in the after life, for all our acts."

But here Lecour's solemn tone ceased, and he continued—"Now, Germain, I must explain to you more closely the business on which I have sent for you so suddenly. The North-West Company, who, as you know, command the fur-trade of Canada, have word that a new fashion just introduced into Paris has doubled the demand for beaver and tripled the price. They are hurrying over all their skins by their ship which sails in ten days to London from Quebec. I have space on a vessel which goes direct to Dieppe the day after to-morrow, and can therefore forestall them by about two weeks. I have gathered my winter stock into the boats you will see at our landing; and your mother, who has always been so eager to send you to France, has persuaded me to have you as my supercargo. Go, my boy; it is a great opportunity to see the world."

"Yes, my Germain, at last," wife Lecour exclaimed joyfully, throwing her arms around his neck, "at last you will set eyes on Versailles, and my dreams about you will come true!"

The youth himself was in a daze of smiles and tears....