The Fallen Star, or, the History of a False Religion by E.L. Bulwer; And, A Dissertation on the Origin of Evil by Lord Brougham 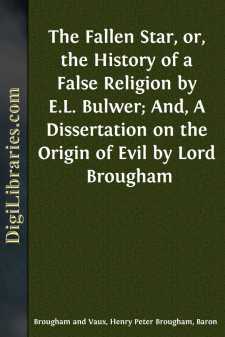 RELIGION, says Noah Webster in his American Dictionary of the English Language, is derived from "Religo, to bind anew;" and, in this History of a False Religion, our author has shown how easily its votaries were insnared, deceived, and mentally bound in a labyrinth of falsehood and error, by a designing knave, who established a new religion and a new order of priesthood by imposing on their ignorance and credulity.

The history of the origin of one supernatural religion will, with slight alterations, serve to describe them all. Their claim to credence rests on the exhibition of so-called miracles—that is, on a violation of the laws of nature,—for, if religions were founded on the demonstrated truths of science, there would be no mystery, no supernaturalism, no miracles, no skepticism, no false religion. We would have only verified truths and demonstrated facts for the basis of our belief. But this simple foundation does not satisfy the unreasoning multitude. They demand signs, portents, mysteries, wonders and miracles for their faith and the supply of prophets, knaves and impostors has always been found ample to satisfy this abnormal demand of credulity.

Designing men, even at the present day, find little difficulty in establishing new systems of faith and belief. Joseph Smith, who invented the Mormon religion, had more followers and influence in this country at his death, than the Carpenter's Son obtained centuries ago from the unlettered inhabitants of Palestine; and yet Smith achieved his success among educated people in this so-called enlightened age, while Jesus taught in an age of semi-barbarism and faith, when both Jews and Pagans asserted and believed that beasts, birds, reptiles and even fishes understood human language, were often gifted with human speech, and sometimes seemed to possess even more than ordinary human intelligence.

They taught that the serpent, using the language of sophistry, beguiled Eve in Eden, who in turn corrupted Adam, her first and only husband. At the baptism of Jesus by John in the river Jordan, the voice of a dove resounded in the heavens, saying, quite audibly and distinctly, "Thou art my beloved Son; in thee I am well pleased." Balaam disputed with his patient beast of burden, on their celebrated journey in the land of Moab, and the ass proved wiser in the argument that ensued than the inspired prophet who bestrode him, The great fish Oannes left his native element and taught philosophy to the Chaldeans on dry land. One reputable woman, of Jewish lineage,—the mother of an interesting family—was changed to a pillar of salt in Sodom while another female of great notoriety known to fame as the celebrated "Witch of Endor," raised Samuel from his grave in Ramah. Saint Peter found a shilling in the mouth of a fish which he caught in the Sea of Galilee, and this lucky incident enabled the impecunious apostle to pay the "tribute money" in Capernaum. Another famous Israelite,—so it is said,—broke the record of balloon ascensions in Judea, and ascended into heaven in a chariot of fire.

In an age of ignorance wonders abound, prodigies occur, and miracles become common, The untaught masses are easily deceived, and their unreasoning credulity enables them to proudly boast of their unquestioning faith. When their feelings are excited and their passions aroused by professional evangelists, they even profess to believe that which they cannot comprehend; and, in the satirical language of Bulwer, they endeavor to "assist their ignorance by the conjectures of their superstition."

Among the multitudes of diverse and opposing religions which afflict mankind, it is self-evident that but one religion may justly claim the inspiration of truth, and it is equally evident to all reasoning minds that that religion is the religion of kindness and humanity,—the religion of noble thoughts and generous deeds,—which removes the enmities of race and creed, and "makes the whole world kin!" And which, in its observance is blessed with sympathy, friendship, happiness and love....