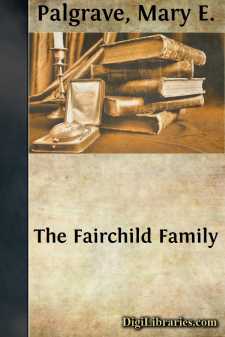 The History of Lucy, Emily, and Henry Fairchild was begun in 1818, nearly a century ago. The two little misses and their brother played and did lessons, were naughty and good, happy and sorrowful, when George III. was still on the throne; when gentlemen wore blue coats with brass buttons, knee-breeches, and woollen stockings; and ladies were attired in short waists, low necks, and long ringlets. The Battle of Waterloo was quite a recent event; and the terror of "Boney" was still used by nursery maids to frighten their charges into good behaviour.

Perhaps some of those who take up this book and glance at its title-page are saying to themselves. We have plenty of stories about the children of to-day—the children of the twentieth century, not of the early nineteenth. How should it interest us to read of these little ones of the time of our great-grandparents, whose lives were so dull and ideas so old-fashioned; who never played cricket or tennis, or went to London or to the seaside, or rode bicycles, or did any of the things we do?

To anyone who is debating whether or no he will read the Fairchild Family, I would say, Try a chapter or two before you make up your mind. It is not what people do, but what they are that makes them interesting. True enough, Lucy, Emily and Henry led what we should call nowadays very dull lives; but they were by no means dull little people for all that. We shall find them very living and real when we make acquaintance with them. They tore their clothes, and lost their pets, and wanted the best things, and slapped each other when they disagreed. They had their good times and their bad times, their fun and frolic and their scrapes and naughtiness, just as children had long before they were born and are having now, long, long after they are dead.

In fact, as we get to know them—and, I hope, to love them—we shall realize, perhaps with wonder, how very like they are to the children of to-day. If they took us by the hand and led us to their playroom, or into "Henry's arbour" under the great trees, we should make friends with them in five minutes, even though they wear long straight skirts down to their ankles and straw bonnets burying their little faces, and Henry is attired in a frock and pinafore, albeit he is eight years old. We should have glorious games with them, following the fleet Lucy running like a hare; we should kiss them when we went away, and reckon them ever after among our friends.

And so, as we follow the History of the Fairchild Family we shall understand, better than we have yet done, how children are children everywhere, and very much the same from generation to generation. Knowing Lucy and Emily and Henry will help us to feel more sympathy with other children of bygone days, the children of our history books—with pretty Princess Amelia, and the little Dauphin in the Bastille, with sweet Elizabeth Stuart, the "rose-bud born in snow" of Carisbrook Castle, and a host of others. They were real children too, who had real treats and real punishments, real happy days and sad ones. They felt and thought and liked and disliked much the same things as we do now. We stretch out our hands to them across the misty centuries, and hail them our companions and playmates.

Few people nowadays, even among those who know the Fairchild Family, know anything of its writer, Mrs. Sherwood. Yet her life, as told by herself, is as amusing as a story, and as full of incidents as a life could well be. When she was a very old woman she wrote her autobiography, helped by her daughter; and from this book, which has been long out of print, I will put together a short sketch which will give you some idea of what an interesting and attractive person she was....