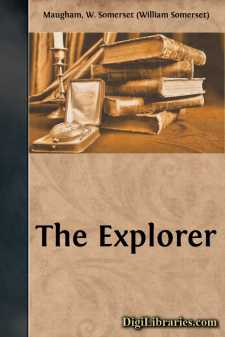 The sea was very calm. There was no ship in sight, and the sea-gulls were motionless upon its even greyness. The sky was dark with lowering clouds, but there was no wind. The line of the horizon was clear and delicate. The shingly beach, no less deserted, was thick with tangled seaweed, and the innumerable shells crumbled under the feet that trod them. The breakwaters, which sought to prevent the unceasing encroachment of the waves, were rotten with age and green with the sea-slime. It was a desolate scene, but there was a restfulness in its melancholy; and the great silence, the suave monotony of colour, might have given peace to a heart that was troubled. They could not assuage the torment of the woman who stood alone upon that spot. She did not stir; and, though her gaze was steadfast, she saw nothing. Nature has neither love nor hate, and with indifference smiles upon the light at heart and to the heavy brings a deeper sorrow. It is a great irony that the old Greek, so wise and prudent, who fancied that the gods lived utterly apart from human passions, divinely unconscious in their high palaces of the grief and joy, the hope and despair, of the turbulent crowd of men, should have gone down to posterity as the apostle of brutish pleasure.

But the silent woman did not look for solace. She had a vehement pride which caused her to seek comfort only in her own heart; and when, against her will, heavy tears rolled down her cheeks, she shook her head impatiently. She drew a long breath and set herself resolutely to change her thoughts.

But they were too compelling, and she could not drive from her mind the memories that absorbed it. Her fancy, like a homing bird, hovered with light wings about another coast; and the sea she looked upon reminded her of another sea. The Solent. From her earliest years that sheet of water had seemed an essential part of her life, and the calmness at her feet brought back to her irresistibly the scenes she knew so well. But the rippling waves washed the shores of Hampshire with a persuasive charm that they had not elsewhere, and the broad expanse of it, lacking the illimitable majesty of the open sea, could be loved like a familiar thing. Yet there was in it, too, something of the salt freshness of the ocean, and, as the eye followed its course, the heart could exult with a sense of freedom. Sometimes, in the dusk of a winter afternoon, she remembered the Solent as desolate as the Kentish sea before her; but her imagination presented it to her more often with the ships, outward bound or homeward bound, that passed continually. She loved them all. She loved the great liners that sped across the ocean, unmindful of wind or weather, with their freight of passengers; and at night, when she recognised them only by the long row of lights, they fascinated her by the mystery of their thousand souls going out strangely into the unknown. She loved the little panting ferries that carried the good folk of the neighbourhood across the water to buy their goods in Southampton, or to sell the produce of their farms; she was intimate with their sturdy skippers, and she delighted in their airs of self-importance. She loved the fishing boats that went out in all weathers, and the neat yachts that fled across the bay with such a dainty grace. She loved the great barques and the brigantines that came in with a majestic ease, all their sails set to catch the remainder of the breeze; they were like wonderful, stately birds, and her soul rejoiced at the sight of them. But best of all she loved the tramps that plodded with a faithful, grim tenacity from port to port; often they were squat and ugly, battered by the tempest, dingy and ill-painted; but her heart went out to them. They touched her because their fate seemed so inglorious. No skipper, new to his craft, could ever admire the beauty of their lines, nor look up at the swelling canvas and exult he knew not why; no passengers would boast of their speed or praise their elegance. They were honest merchantmen, laborious, trustworthy, and of good courage, who took foul weather and peril in the day's journey and made no outcry. And with a sure instinct she saw the romance in the humble course of their existence and the beauty of an unboasting performance of their duty; and often, as she watched them, her fancy glowed with the thought of the varied merchandise they carried, and their long sojourning in foreign parts....