The evolution of English lexicography 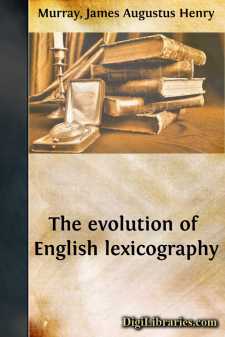 When the ‘Act to facilitate the provision of Allotments for the Labouring Classes’ was before the House of Commons in 1887, a well-known member for a northern constituency asked the Minister who had charge of the measure for a definition of the term allotment, which occurred so often in the Bill. The Minister somewhat brusquely told his interrogator to ‘look in the Dictionary,’ at which there was, according to the newspapers, ‘a laugh.’ The member warmly protested that, being called upon to consider a measure dealing with things therein called ‘Allotments’, a term not known to English Law, nor explained in the Bill itself, he had a right to ask for a definition. But the only answer he received was ‘Johnson's Dictionary! Johnson's Dictionary!’ at which, according to the newspapers, the House gave ‘another laugh,’ and the interrogator subsided. The real humour of the situation, which was unfortunately lost upon the House of Commons, was, that as agricultural allotments had not been thought of in the days of Dr. Johnson, no explanation of the term in this use is to be found in Johnson's Dictionary; as, however, this happened to be unknown, alike to the questioner and to the House, the former missed a chance of ‘scoring’ brilliantly, and the House the chance of a third laugh, this time at the expense of the Minister. But the replies of the latter are typical of the notions of a large number of persons, who habitually speak of ‘the Dictionary,’ just as they do of ‘the Bible,’ or ‘the Prayer-book,’ or ‘the Psalms’; and who, if pressed as to the authorship of these works, would certainly say that ‘the Psalms’ were composed by David, and ‘the Dictionary’ by Dr. Johnson.

I have met persons of intelligence who supposed that if Dr. Johnson was not the sole author of ‘the Dictionary’—a notion which, in view of the ‘pushfulness’ wherewith, in recent times, Dictionaries, American and other, have been pressed upon public notice, is now not so easily tenable—he was, at least, the ‘original author,’ from whose capacious brain that work first emanated. Whereas, in truth, Dr. Johnson had been preceded by scores of workers, each of whom had added his stone or stones to the lexicographic cairn, which had already risen to goodly proportions when Johnson made to it his own splendid contribution.

For, the English Dictionary, like the English Constitution, is the creation of no one man, and of no one age; it is a growth that has slowly developed itself adown the ages. Its beginnings lie far back in times almost prehistoric. And these beginnings themselves, although the English Dictionary of to-day is lineally developed from them, were neither Dictionaries, nor even English. As to their language, they were in the first place and principally Latin: as to their substance, they consisted, in large part at least, of glosses....