The Ethnology of the British Colonies and Dependencies 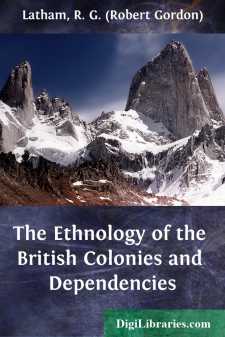 CHAPTER I. DEPENDENCIES IN EUROPE.

Heligoland.—We learn from a passage in the Germania of Tacitus, that certain tribes agreed with each other in the worship of a goddess who was revered as Earth the Mother; that a sacred grove, in a sacred island, was dedicated to her; and that, in that grove, there stood a holy wagon, covered with a pall, and touched by the priest only. The goddess herself was drawn by heifers; and as long as she vouchsafed her presence among men, there was joy, and feasts, and hospitality; and peace amongst otherwise fierce tribes instead of war and violence. After a time, however, the goddess withdrew herself to her secret temple—satiated with the converse of mankind; and then[2] the wagon, the pall, and the deity herself were bathed in the holy lake. The administrant slaves were sucked up by its waters. There was terror and there was ignorance; the reality being revealed to those alone who thus suddenly passed from life to death.

Now we know, by name at least, five of the tribes who are thus connected by a common worship—mysterious and obscure as it is. They are the Reudigni, the Aviones, the Eudoses, the Suardones, and the Nuithones.

Two others we know by something more than name—the Varini and the Langobardi.

The eighth is our own parent stock—the Angli.

Such is one of the earliest notices of the old creed of our German forefathers; and, fragmentary and indefinite as it is, it is one of the fullest which has reached us. I subjoin the original text, premising that, instead of Herthum, certain MSS. read Nerthum.

What connects the passage with the ethnology of Heligoland? Heligoland is, probably, the island of the Holy Grove. Its present name indicates this—the holy land. Its position in the main sea, or Ocean, does the same....