The Essays of "George Eliot" Complete 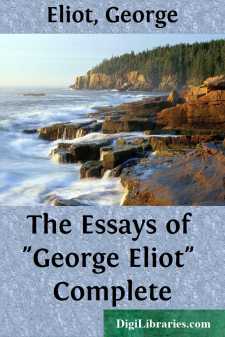 Since the death of George Eliot much public curiosity has been excited by the repeated allusions to, and quotations from, her contributions to periodical literature, and a leading newspaper gives expression to a general wish when it says that “this series of striking essays ought to be collected and reprinted, both because of substantive worth and because of the light they throw on the author’s literary canons and predilections.”  In fact, the articles which were published anonymously in The Westminster Review have been so pointedly designated by the editor, and the biographical sketch in the “Famous Women” series is so emphatic in its praise of them, and so copious in its extracts from one and the least important one of them, that the publication of all the Review and magazine articles of the renowned novelist, without abridgment or alteration, would seem but an act of fair play to her fame, while at the same time a compliance with a reasonable public demand.

Nor are these first steps in her wonderful intellectual progress any the less, but are all the more noteworthy, for being first steps.  “To ignore this stage,” says the author of the valuable little volume to which we have just referred—“to ignore this stage in George Eliot’s mental development would be to lose one of the connecting links in her history.”  Furthermore, “nothing in her fictions excels the style of these papers.”  Here is all her “epigrammatic felicity,” and an irony not surpassed by Heine himself, while her paper on the poet Young is one of her wittiest bits of critical analysis.

Her translation of Status’s “Life of Jesus” was published in 1840, and her translation of Feuerbach’s “Essence of Christianity” in 1854.  Her translation of Spinoza’s “Ethics” was finished the same year, but remains unpublished.  She was associate editor of The Westminster Review from 1851 to 1853.  She was about twenty-seven years of age when her first translation appeared, thirty-three when the first of these magazine articles appeared, thirty-eight at the publication of her first story, and fifty-nine when she finished “Theophrastus Such.”  Two years after she died, at the age of sixty-one.  So that George Eliot’s literary life covered a period of about thirty-two years.

The introductory chapter on her “Analysis of Motives” first appeared as a magazine article, and appears here at the request of the publishers, after having been carefully revised, indeed almost entirely rewritten by its author.

George Eliot is the greatest of the novelists in the delineation of feeling and the analysis of motives.  In “uncovering certain human lots, and seeing how they are woven and interwoven,” some marvellous work has been done by this master in the two arts of rhetoric and fiction.

If you say the telling of a story is her forte, you put her below Wilkie Collins or Mrs. Oliphant; if you say her object is to give a picture of English society, she is surpassed by Bulwer and Trollope; if she be called a satirist of society, Thackeray is her superior; if she intends to illustrate the absurdity of behavior, she is eclipsed by Dickens; but if the analysis of human motives be her forte and art, she stands first, and it is very doubtful whether any artist in fiction is entitled to stand second.  She reaches clear in and touches the most secret and the most delicate spring of human action.  She has done this so well, so apart from the doing of everything else, and so, in spite of doing some other things indifferently, that she works on a line quite her own, and quite alone, as a creative artist in fiction.  Others have done this incidentally and occasionally, as Charlotte Brontë and Walter Scott, but George Eliot does it elaborately, with laborious painstaking, with purpose aforethought.  Scott said of Richardson: “In his survey of the heart he left neither head, bay, nor inlet behind him until he had traced its soundings, and laid it down in his chart with all its minute sinuosities, its depths and its shallows.”

This is too much to say of Richardson, but it is not too much to say of George Eliot.  She has sounded depths and explored sinuosities of the human heart which were utterly unknown to the author of “Clarissa Harlowe.”  It is like looking into the translucent brook—you see the wriggling tad, the darting minnow, the leisurely trout, the motionless pike, while in the bays and inlets you see the infusoria and animalculæ as well.

George Eliot belongs to and is the greatest of the school of artists in fiction who write fiction as a means to an end, instead of as an end.  And, while she certainly is not a story-teller of the first order, considered simply as a story-teller, her novels are a striking illustration of the power of fiction as a means to an end.  They remind us, as few other stories do, of the fact that however inferior the story may be considered simply as a story, it is indispensable to the delineation of character.  No other form of composition, no discourse, or essay, or series of independent sketches, however successful, could succeed in bringing out character equal to the novel.  Herein is at once the justification of the power of fiction.  “He spake a parable,” with an “end” in view which could not be so expeditiously attained by any other form of address....