The Epistles of St. Peter and St. Jude Preached and Explained 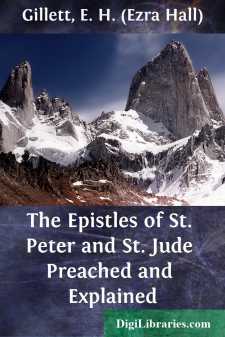 Several years ago, among the dusty piles of old pamphlets stored away upon the upper shelves of the Union Theological Seminary library, I met with several works of Luther, in the original editions, as they were issued during his lifetime from his press at Wittemberg. Among them were his Commentaries, or rather Lectures, on the Epistles of Peter and Jude.* The forbidding aspect of the page, with the obsolete spelling of its words, and its somewhat coarse typography, was rather an incitement to master it; for here was Luther, presenting himself to the eye of the reader just as, more than three hundred years ago, he presented himself to the eyes of thousands of his countrymen. Upon a partial perusal of the Commentary, I became satisfied that it would repay a more attentive study; and finding, upon investigation, that it had never been translated into English, I set myself to the task which had been so long neglected. The pleasing labor was accomplished, and the manuscript laid aside for several years. The conviction, confirmed by a re-perusal of it, that others besides myself would be interested in the work, has led me to determine on its publication.

* Another copy of this same edition of Luther on Peter, belonging to a clergyman's library which was sold at auction in this city, four or five years since, brought an almost fabulous price.

Luther's Commentary on the Galatians, excellent as it is, is too voluminous and expensive to be very extensively circulated, while the phraseology of the early translation, which has not been modified, prevents its proper appreciation by modern readers. And yet any one that would truly know the man, and the secret of his power, must study these in his writings. The Commentary on the Epistles of Peter and Jude, presented in a literal but more modern style to the English reader, is not liable to these objections; and yet, in the variety of its themes, the clearness of its exposition, the stinging force of its rebukes, the simplicity and directness of its language, it is scarcely surpassed by any of Luther's other writings. On the great subject of justification by faith alone, he is here, as in his Commentary on the Epistle to the Galatians, full and emphatic. The relation of faith to works is clearly and carefully defined, while the subjects presented in the text afford full opportunity for discussing the great questions that concern the relative duties of civil and social life. The volume thus becomes at once a manual of doctrine and of duty. On the foundation of faith is reared the superstructure of a Christian life. Luther is seen to have fully apprehended the force of all the objections that could be urged against his teachings, and with convincing ability he vindicates them from every charge. Throughout the volume we have ever before us the earnest, devout spirit of the Reformer, for the most part unfolding in the simplest manner the great doctrines of the Gospel, but occasionally indulging in volcanic outbursts of indignation against the hierarchical corruptions of his day, and pouring out upon them the lava-tides of withering rebuke.

It may seem strange that this work of Luther's has never before been translated. But, unlike his Commentary on the Epistle to the Galatians, which he himself translated into Latin, that it might have a wider circulation among the learned of Europe, this was published by him only in the German language, which was little known in England, and hence it was deprived of that notoriety which would have drawn special attention to it, as well as of that Latin dress which would have facilitated an English translation. It is well known, moreover, that Luther formed a most humble estimate of his own writings, and was uniformly reluctant to collect his works in volumes, or bestow upon them any editorial care. He seemed perfectly willing to have them sink to oblivion, and could not be persuaded by the most urgent representations to do anything which might rescue them from such a fate. Besides, it is to be noted that a perusal of this volume especially would soon satisfy the reader, that after the accession of Queen Elizabeth to the throne, it stood little chance of securing the necessary approval or imprimatur of an English bishop....