The English Novel in the Time of Shakespeare 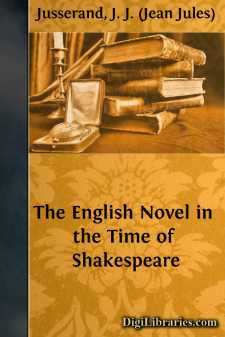 The London publishers annually issue statistics of the works that have appeared in England during the year. Sometimes sermons and books on theology reach the highest figures; England is still the England of the Bible, the country that at the time of the Reformation produced three hundred and twenty-six editions of the Scriptures in less than a century, and whose religious literature is so abundant that to-day twenty-eight volumes of the British Museum catalogue treat of the single word Bible. When theology does not obtain the first rank, it holds the second. The only writings that can compete with it, in the country of Shakespeare, of Bacon and of Newton, are neither dramas, nor books of philosophy nor scientific treatises; they are novels. Theology had the supremacy in 1885; novels obtained it in 1887, 1888, and 1889. Omitting stories written for children, nine hundred and twenty-nine novels were published in England in 1888, and one thousand and forty in 1889. Thus the conscientious critic who wished to acquaint himself with all of them would have to read more than two novels and a half, often in three volumes, every day all the year round, without stopping even on Sundays.

This passion for the novel which does not exist in the same degree in any other nation, only acquired its full strength in England in the eighteenth century. At that time English novels produced in Europe the effect of a revelation; they were praised extravagantly, they were copied, they were imitated, and the popularity hitherto enjoyed by the "Princesse de Clèves," "Marianne," and "Gil Blas," was obscured for a while. "I say that Anglicism is gaining on us," wrote d'Argenson; "after 'Gulliver' and 'Pamela,' here comes 'Tom Jones,' and they are mad for him; who could have imagined eighty years ago that the English would write novels and better ones than ours? This nation pushes ahead by force of unrestricted freedom."

Modern society had at length found the kind of literature which could be most suitably employed to depict it. Society had been presented on the English stage by the authors of domestic comedies; Steele and Addison had painted it in their essays. But in both forms the portrait was incomplete. The exigencies of the stage, the necessary brevity of the essay, made it impossible to give adequate expression to the infinite complexity of the subject. The novel created anew by Defoe, Fielding, and Richardson, made it an easy thing to introduce into the arena of literature those men and women of intelligence and feeling who, for long ages, had been pleased to see other people the chief subjects of books and inwardly desired that authors should at last deal more especially with themselves. The age of chivalry was gone; the time of the Arthurs and the Tristans had passed away; such a society as the new one could not so well be sung in verse; but it could extremely well be described in prose.

As Fielding remarked, the novel takes the place of the old epic. We think of the Harlowes when in the olden time we should have dreamed of the Atridæ....