The English in the West Indies or, The Bow of Ulysses 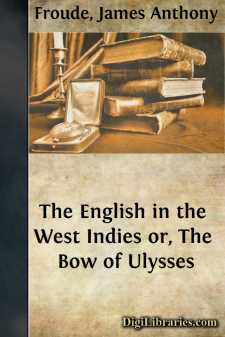 The Colonial Exhibition has come and gone. Delegates from our great self-governed dependencies have met and consulted together, and have determined upon a common course of action for Imperial defence. The British race dispersed over the world have celebrated the Jubilee of the Queen with an enthusiasm evidently intended to bear a special and peculiar meaning. The people of these islands and their sons and brothers and friends and kinsfolk in Canada, in Australia, and in New Zealand have declared with a general voice, scarcely disturbed by a discord, that they are fellow-subjects of a single sovereign, that they are united in feeling, united in loyalty, united in interest, and that they wish and mean to preserve unbroken the integrity of the British Empire. This is the answer which the democracy has given to the advocates of the doctrine of separation. The desire for union while it lasts is its own realisation. As long as we have no wish to part we shall not part, and the wish can never rise if when there is occasion we can meet and deliberate together with the same regard for each other's welfare which has been shown in the late conference in London.

Events mock at human foresight, and nothing is certain but the unforeseen. Constitutional government and an independent executive were conferred upon our larger colonies, with the express and scarcely veiled intention that at the earliest moment they were to relieve the mother country of responsibility for them. They were regarded as fledgelings who are fed only by the parent birds till their feathers are grown, and are then expected to shift for themselves. They were provided with the full plumage of parliamentary institutions on the home pattern and model, and the expectation of experienced politicians was that they would each at the earliest moment go off on their separate accounts, and would bid us a friendly farewell. The irony of fate has turned to folly the wisdom of the wise. The wise themselves, the same political party which were most anxious twenty years ago to see the colonies independent, and contrived constitutions for them which they conceived must inevitably lead to separation, appeal now to the effect of those very constitutions in drawing the Empire closer together, as a reason why a similar method should be immediately adopted to heal the differences between Great Britain and Ireland. New converts to any belief, political or theological, are proverbially zealous, and perhaps in this instance they are over-hasty. It does not follow that because people of the same race and character are drawn together by equality and liberty, people of different races and different characters, who have quarrelled for centuries, will be similarly attracted to one another. Yet so far as our own colonies are concerned it is clear that the abandonment by the mother country of all pretence to interfere in their internal management has removed the only cause which could possibly have created a desire for independence. We cannot, even if we wish it ourselves, shake off connections who cost us nothing and themselves refuse to be divided. Politicians may quarrel; the democracies have refused to quarrel; and the result of the wide extension of the suffrage throughout the Empire has been to show that being one the British people everywhere intend to remain one. With the same blood, the same language, the same habits, the same traditions, they do not mean to be shattered into dishonoured fragments. All of us, wherever we are, can best manage our own affairs within our own limits; yet local spheres of self-management can revolve round a common centre while there is a centripetal power sufficient to hold them; and so long as England 'to herself is true' and continues worthy of her ancient reputation, there are no causes working visibly above the political horizon which are likely to induce our self-governed colonies to take wing and leave us. The strain will come with the next great war. During peace these colonies have only experienced the advantage of union with us. They will then have to share our dangers, and may ask why they are to be involved in quarrels which are not of their own making....